As far as why 24/7 Wall St. has caution for being so bullish in 2016, these are just some Dow stats investors should consider.

Analysts see all 30 Dow stocks rising in 2016, even the oil stocks and heavy exporters. This just feels way too optimistic and assumes that not a single shoe falls at any of the Dow stocks. In 2015, 14 of 30 Dow stocks had negative total returns. The average forward P/E (calendar 2016) for Dow stocks was 16.5 at the end of 2015. All 30 Dow stocks have reported negative foreign exchange drags hurting exports or lowering earnings from overseas sales after currency calculations.

Another serious risk that seems very likely to thwart the bullish analysts is that 2016’s first week was the worst first week dating back to at least 1928. Dow stocks (led by Apple, GE, Cisco, IBM, Microsoft, McDonald’s, Wal-Mart) are likely to buy back a record sum of dollars worth of stock in 2016. Buybacks are good, but they distort earnings per share growth and may be eating up capital that could be used in other manners.

The composition of the Dow matters as well. It turns out that five of the 30 (16.666%) Dow components are technology stocks, but they have a combined weighting of only 14.25% due to the Dow’s price-weighted index calculation. Going back to mid-2009’s index changes, five of the 30 DJIA stocks have changed, and since the 1999 index changes have 10 Dow stocks (33.33%) being different than today. Is the Dow changing too much?

Dow calculations are more of a rounding error than the traditional S&P 500 projections. The 2016 S&P 500 targets from 14 Wall Street strategists imply positive but choppy gains. And here is how using the consensus analyst targets and applying a mean percentage of a total return for each Dow stock has looked during the bull market of 2010 to 2015:

24/7 Wall St.
The 6 Most Shorted Nasdaq Stocks: Short Sellers Give Up on Intel, Apple

As a final reminder, that methodology was what generated an implied upside in the DJIA to 19,700. That just seems far too optimistic after the 1,000 drop in Dow points in the first week of 2016. If the Dow methodology from years past magically ends up being true, the 13% gain from the end of 2015 would be a gain of more than 19% in 2016 from the 16,500 level seen after the first week of the year. Miracles can happen, and the trend at the end of 2015 was that investors found different reasons to buy every single dip for more than the past four years.

A snapshot of the Dow stocks has been included below. Data came from Yahoo! Finance and FINVIZ and was as of December 31, 2015. 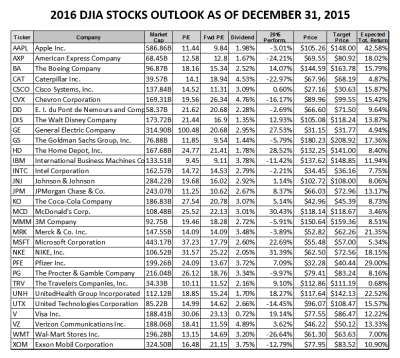