If there is one brokerage research firm that can turn the heads of all investors at once it would have to be Goldman Sachs Group Inc. (NYSE: GS). After all, Goldman Sachs advises wealthy individuals with millions or billions in assets and advises most of the large institutional investors in some form or fashion. So what are investors supposed to make of a pro-2017 outlook by Goldman Sachs on the same day that the Dow, S&P 500, and NASDAQ each hit all-time highs?

Goldman Sachs has issued its 2017 macroeconomic outlook and the firm is calling for a pickup of growth. Just do not overlook the notion that Goldman Sachs also sees downside risks as well.

The 2017 outlook is now signaling that global real GDP growth will be at the top of the 3% to 3.5% range. This was shown to also be the norm of the last five years. While this is better than we might have expected even as recently as a month ago, Goldman Sachs’ outlook shows that the risks to the forecast are elevated by political uncertainty in the U.S. and Europe. There are also potential impacts of a stronger dollar on emerging markets.

Goldman Sachs is calling for a continued momentum from improved financial conditions globally. The firm sees a near-term boost to growth and inflation from a U.S. fiscal stimulus package under President-elect Donald Trump, but they also see this as one that is likely to be smaller than initial proposals.

Goldman Sachs sees a series of Federal Reserve interest rate hikes as well, enough to push up long-term interest rates and temper growth. The firm also sees a greater interest rate divergence between the United States, Europe and Japan. And there is also an expected upward pressure on the dollar — which can make our markets more attractive to foreign investors while making our the goods from the nation’s largest manufacturers that much more expensive to buy.

Several other key issues have been addressed in recent days by the firm in the Goldman Sachs client briefings regarding President-elect Trump and the economic issues at the top of his agenda. Goldman Sachs said:

Tax reform, infrastructure spending, trade policy, and the repeal of the Affordable Care Act are widely considered to be on the shortlist for the Republican-controlled government…

Still, Alec Phillips of Goldman Sachs Research team believes that policy may take longer than expected. He also believes that some of these key issues and changes may come in a slimmed-down form. One such issue is Trump’s tax plan. If Congress were to approve what has been laid out previously, then Goldman Sachs pointed out that they would be voting to raise the budget deficit potentially by over $1 trillion per year. Still, the firm thinks that a tax cut of 2% of GDP sounds like it could happen while a proactive vote to raise the budget deficit to over $1 trillion seems less likely.

One more issue to focus on is where Trump can act on his own without Congress. The firm’s view is that corporate tax changes are more likely than personal tax cuts in 2017.

24/7 Wall St. would point out to its readers that many more 2017 outlook pieces are going to be coming out over the next two to eight weeks. Stocks have risen handily over the last ten trading sessions on the post-Trump victory. Many financials and infrastructure stocks have risen 15% or 20%, and some of the other sectors have continued their runs higher. 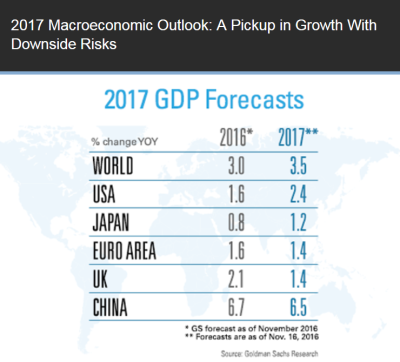