Federal Deficit to Plunge to $514 Billion

Source: Thinkstock
The U.S. Congressional Budget Office (CBO) released its Budget and Economic Outlook: 2014 to 2024 Tuesday morning. The non-partisan CBO now estimates that the federal budget deficit in fiscal year 2014 will total $514 billion, less than half the $1.4 trillion federal deficit in 2009. The estimated deficit represents about 3% of U.S. gross domestic product (GDP), roughly the average percentage over the past 40 years. 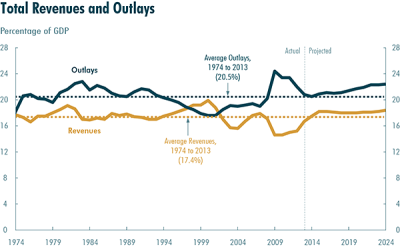 After 2015, the annual deficit is forecast to grow because “revenues are expected to grow at roughly the same pace as GDP whereas spending is expected to grow more rapidly than GDP.” The CBO explains:

In CBO’s baseline, spending is boosted by the aging of the population, the expansion of federal subsidies for health insurance, rising health care costs per beneficiary, and mounting interest costs on federal debt. By contrast, all federal spending apart from outlays for Social Security, major health care programs, and net interest payments is projected to drop to its lowest percentage of GDP since 1940 (the earliest year for which comparable data have been reported).

The outlook also calls for unemployment in the United States to remain above 6% until late 2016. GDP is expected to grow at a rate of about 3% annually through 2017, after which “economic growth will diminish to a pace that is well below the average seen over the past several decades.” Inflation (as measured by the price index for personal consumption expenditures) is expected to remain at or below 2% for the next decade, while interest rates are expected to rise to an average of 3.7% in the period between 2018 and 2024 as the economy improves. The CBO also expects rates on 10-year Treasury notes to average 5% during those years.