What We Can Learn From Automation in the Agriculture Industry

Agriculture has been an important case study in automation. The tractor, for example, transformed agriculture from a human- and horse-powered industry into a mechanized industry during the past hundred years. If agriculture is any indication, other industries in the process of automation are likely to enjoy increased productivity and margins, both of which should boost their returns on invested capital over time.

The tractor is a good proxy for the level of automation in the agriculture industry. As shown below, the adoption of the tractor followed the traditional S-curve. While displacing horses and mules, it hit an inflection point in the 20-25% range in 1940 and within 30 years leveled off at roughly 80% in 1969. 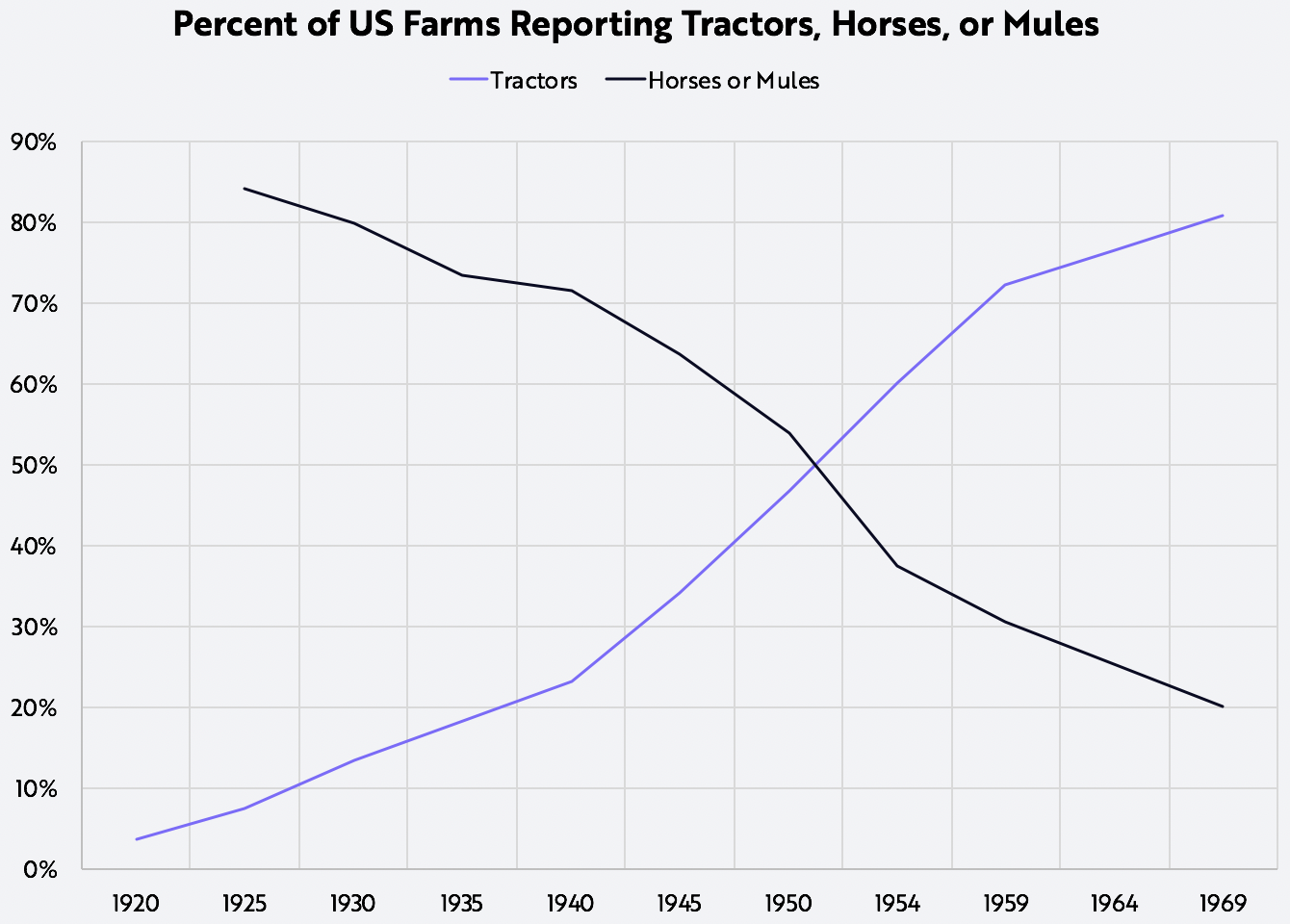 “If agriculture is any indication, other industries in the process of automation are likely to enjoy increased productivity and margins.”

Thanks to the tractor, farm productivity increased dramatically. Between 1950 and 2015 total farm output nearly tripled while employment dropped by more than two thirds, as shown below. 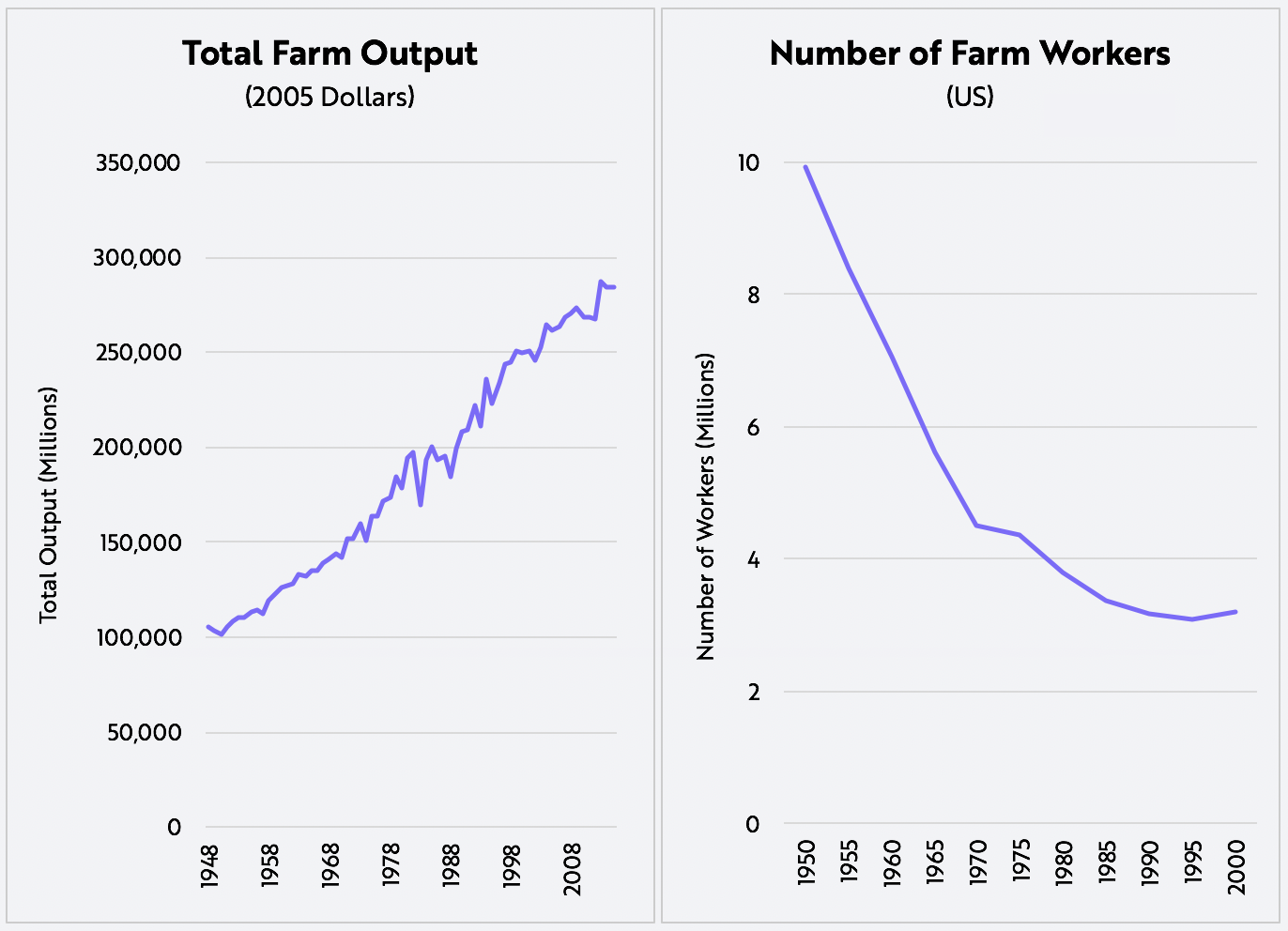 Not only did automation provide farms with operating leverage, but it also increased their returns on capital, as shown below. Important to note, as the number of horses was peaking, they consumed the equivalent of ~22% of the crops produced on farms. Fueled by another source of energy, tractors increased worker productivity and freed for sale more of the crops farms produced. By 2015, energy as an intermediate good was only 3% of total output in agriculture. 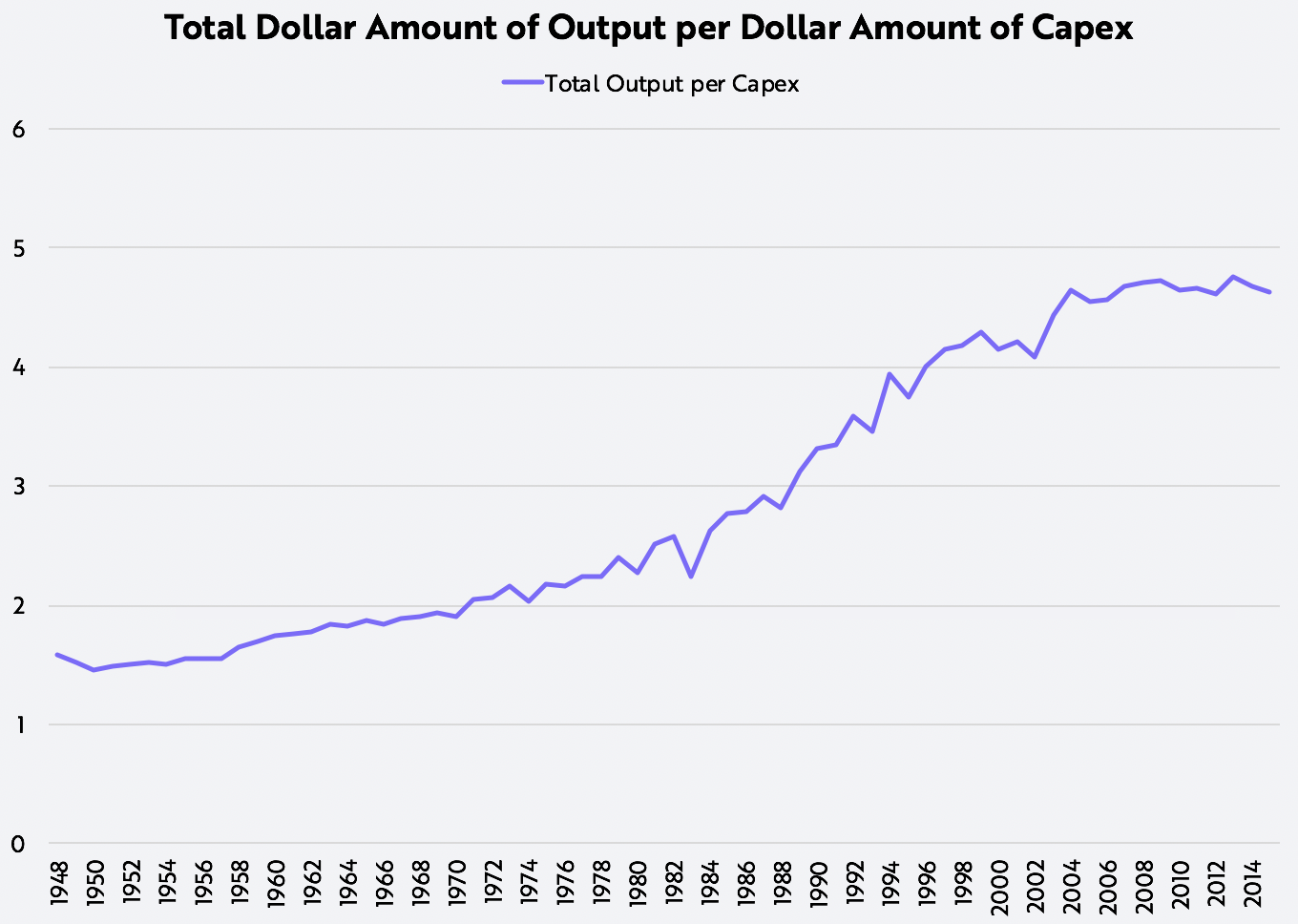 On a microeconomic level, the productivity associated with increased automation can benefit different constituencies in several ways. ARK sees four beneficiaries or, more likely, some combination of the four, as productivity increases:

On a macroeconomic level, however, one trend becomes clear: labor share, or wages as a percent of income, falls as automation increases. According to ARK’s research, between 1950 and 2015, for example, labor’s share of farm income dropped from nearly 70% to less than 10%, as shown below. 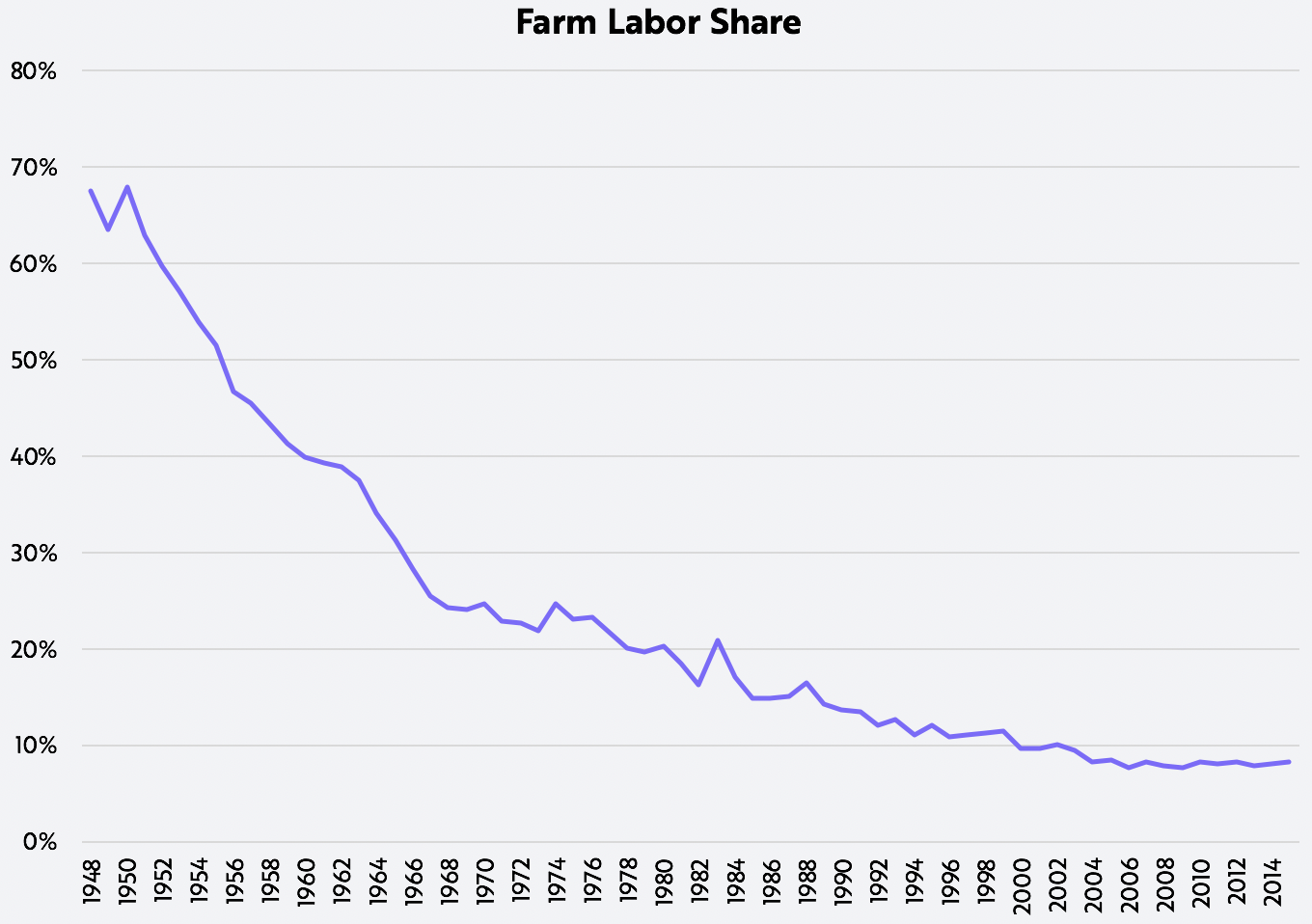 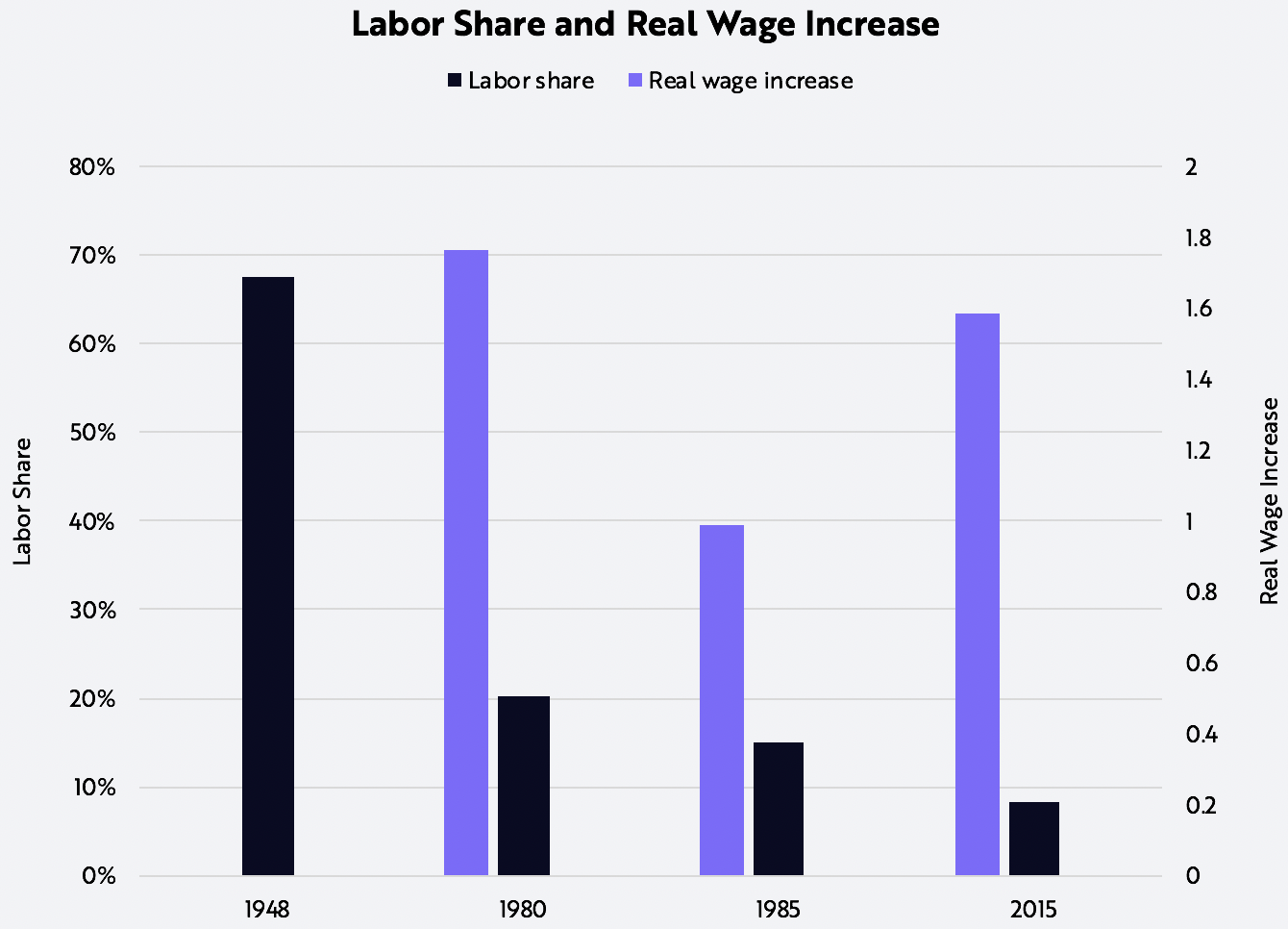 Although the improvement in farm productivity has been more than a hundred years in the making, the US economy still is at in the early stages of automating which could boost operating margins across many if not most industries. If so, these industries will be revalued in the equity markets. Stay tuned as ARK publishes a series of blogs on the impact of automation on the US economy and various industries.