All three major U.S. stock indexes traded lower in the noon hour Monday, with the tech-heavy Nasdaq down the most with a decline of around 1.15%. The aggressive spread of the Omicron coronavirus variant in the United Kingdom is getting a large share of the blame, but the Federal Reserve policy statement due on Wednesday also is raising concerns that the central bank may be aiming to remove the punch bowl more quickly than markets anticipate.

Crude oil traded roughly flat with Friday’s closing price at around $71.70 a barrel. Bitcoin sank further since early Monday, trading at around $47,600. The yield on 10-year Treasury notes dipped by about six basis points, and the two-year/10-year spread narrowed to around 0.78% from Friday’s close of 0.81%.

Monday’s two biggest losers on our meme stock watch list were the two OG meme plays. AMC Entertainment Holdings Inc. (NYSE: AMC) had no specific news Monday, but as year-end approaches, investors are probably shedding their riskiest investments in favor of something less volatile. If the Fed does begin (or signal that it plans to begin) tightening more quickly than now expected, risky investments will have to wait until the smoke clears — or until retail investors launch another short squeeze.

The same story holds for GameStop Corp. (NYSE: GME). The company had no news Monday, but the stock has dropped more than 10%. As the FBB Capital Partners director of research, Mike Bailey, told Bloomberg, “Now reality is sinking in and investor sentiment is shifting to fear and downside risk, rather than greed and upside potential.”

Both AMC and GameStop were attracting a lot of retail buyers Monday, though. Fidelity’s order tracker indicated a 75-25 split in orders, with buyers on top, for AMC and an 88-12 split favoring buyers of GameStop shares.

One electric vehicle stock we haven’t had much to say about recently is Canoo Inc. (NASDAQ: GOEV). Since the end of November, the stock is down about 30%. The EV maker’s stock had been performing better than Lucid’s for the past few sessions, but it continued to sink Monday while Lucid’s stock was rising. Lucid (down 30.5%), Canoo (down 30.2%), Tesla (down 15.3%) and Rivian (down 1.8%) have all had some troubles in the past couple of weeks. One other thing to mention here: Canoo’s short interest as of Monday morning was nearly 34% of the stock’s total float, according to Fintel data. Of the 20 stocks most likely to face a short squeeze this week, Canoo ranks 16th, and it is the only one among those 20 with a market cap greater than $400 million. Canoo’s market cap is $2.2 billion.

We typically do not look at ETFs in this report, but we are making an exception here. Cathie Wood’s ARK Innovation ETF (NYSEAMERICAN: ARKK) has dropped about 23% so far in 2021, including a 12.5% drop in the past two weeks. A new ETF that was first mentioned in early August began trading on November 9. Here’s a chart comparing the ARKK ETF, in blue, to the Tuttle Capital Short Innovation ETF (NASDAQ: SARK), in purple. Tuttle’s fund is a short play on ARKK. The reason we mention this at all today is that commenters on several subreddits today claim to be either dumping ARKK shares or loading up on put options. 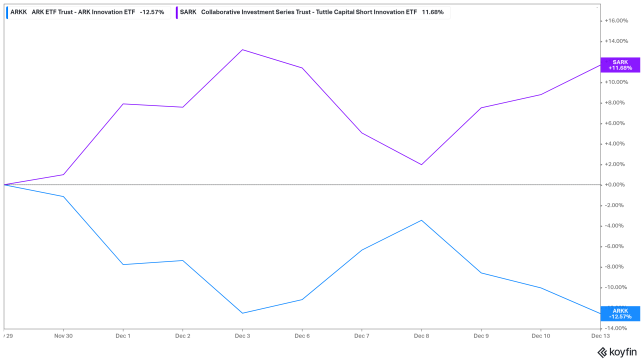