President Biden travels to Brussels Wednesday for a meeting with NATO leaders. The U.S. president is expected to announce more sanctions Thursday after meeting with EU, NATO and G7 leaders. National Security Adviser Jake Sullivan said Tuesday that Biden’s announcement will introduce a “new phase” in efforts to isolate Russia.

According to the Washington Post, Sullivan said that the new sanctions “will include ‘a joint effort to crack down on evasion — on sanction-busting, on any attempt by any country to help Russia basically undermine, weaken or get around the sanctions.'”

Germany has resisted a ban on fossil fuel imports from Russia, claiming that such a move would lead to an economic crisis in western Europe. Chancellor Olaf Scholz said, “To do that from one day to the next would mean plunging our country and the whole of Europe into a recession. Hundreds of thousands of jobs would be at risk. Entire branches of industry are on the brink. Sanctions must not hit European states harder than Russian leadership.”

Russia has reduced the capacity on a 1.4 million barrel per day oil pipeline, citing storm damage that could take up to two months to repair. The Caspian Pipeline Consortium’s capacity could be reduced by 1 million barrels a day until the repairs are completed. The pipeline transports crude oil from the Tengiz field in Kazakhstan to the Russian Black Sea port of Novorossiysk.

The following map from Chevron shows a planned expansion from 2015 that increased capacity by 670,000 barrels a day. Both Chevron and Exxon Mobil use the pipeline. According to a report in the Financial Times, the Caspian Pipeline was exempted from a ban on Russian oil imports into the United States, provided that the oil flowing through the pipeline was “certified as coming from Kazakhstan.” 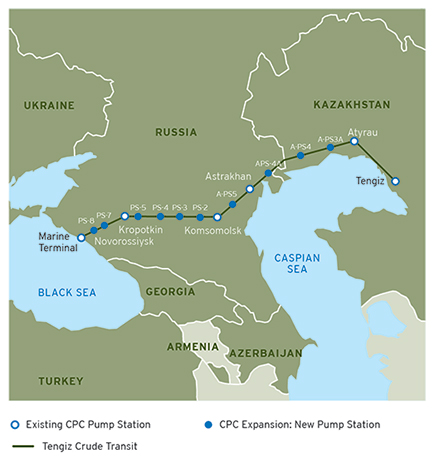 according to the Institute for the Study of War’s daily update. Russia is “likely moving to a phase of protracted bombardment of Ukrainian cities due to the failure of Russia’s initial campaign to encircle and seize Kyiv and other major cities.”