It may be that the slowing economy and the trade war with China, two interdependent factors, have started to catch up with corporate confidence. Layoffs surged in August. This happened across almost every industry.

Corporate jobs research firm Challenger, Gray & Christmas posted its job cuts number for August. During the month, companies announced they would slice 53,480 jobs. That is 37.7% higher than in July and up by about 39% from August of last year.

The numbers year to date were similarly depressing. In the first eight months of 2019, companies announced payroll reductions of 423,312, up 36.2% from the period in 2018. It is the highest job reduction total for a January through August period since 2015. These are the cities losing the most jobs.

Andrew Challenger, vice president of Challenger, Gray & Christmas, shared his opinion about the surge: “Employers are beginning to feel the effects of the trade war and imposed tariffs by the U.S. and China. In fact, trade difficulties were cited as the reason for over 10,000 job cuts in August.” He also indicated that investor anxiety about the markets has undermined confidence, as has a falloff in demand for products and services. This has not yet shown up in most consumer confidence surveys and retail buying numbers. The Challenger, Gray numbers and the reasons behind them mean a change in those markers could be in the offing.

Technology has been among the largest engines of the economy for several years and has driven many job additions. That reversed itself in August. Announced cuts across the industry totaled 15,355, up 341.2% compared to August of last year. While the numbers are not high compared to employment in the sector, the cuts were unusual nevertheless. These are the jobs with the best and worst job security.

The brittle retail sector accounted for 57,226 cuts so far this year, the highest of any sector. As the holiday season approaches, the make-or-break months for retailers are only three months away. These are the retailers closing the most stores.

Sometimes announcements that involve the economy have a silver lining. In this case, there is none. 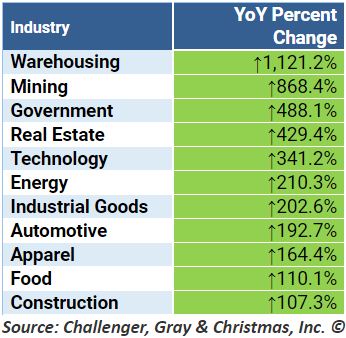