The outplacement firm of Challenger, Gray & Christmas on Thursday released its job-cuts report for September, showing that a total of 41,557 planned U.S. job cuts were announced last month, a decrease of 22.3% compared with announced August cuts. Compared with cuts announced in September 2018, this year’s total is 24.8% lower and is the second-lowest total recorded this year, behind only April’s announced 40,023 cuts.

For the year to date, the retail sector leads all industries with total announced job cuts of 65,358. The good news is that the total is nearly 20,000 fewer than were announced in the first nine months of 2018.

Andrew Challenger, vice president of the outplacement firm, said, “Employers held off on making any large-scale employment decisions in September. Most likely, companies will monitor consumer behavior, government regulation or deregulation, and market conditions during the final quarter of the year in order to make staffing decisions for next year.”

Job losses in the energy industry nearly doubled month over month from 1,531 in August to 2,972 in September. For the first nine months of the year, the sector has lost 22,767 jobs, an increase of nearly 250% year over year.

Challenger has combined its computer, electronics and telecommunications categories into a new technology category. For the year to date, the technology industry has lost 40,257 jobs, an increase of nearly 73% compared with 2018.

ALSO READ: Cities Where Having a Job Doesn’t Keep You Out of Poverty 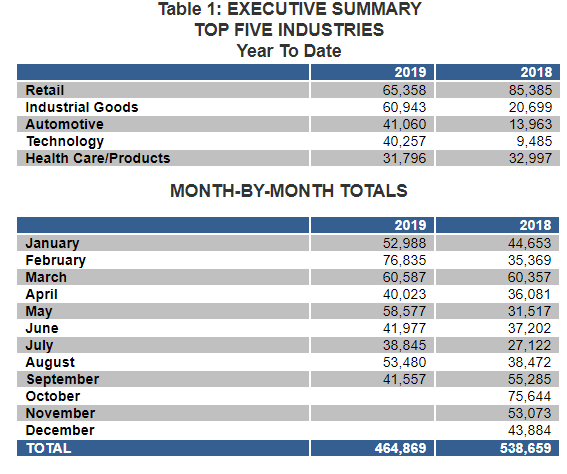