Outplacement firm of Challenger, Gray & Christmas on Thursday released its job-cuts report for October, showing that a total of 50,275 planned U.S. job cuts were announced in the month, an increase of 21% compared with announced September cuts. However, compared with cuts announced in October 2018, this year’s total is 33.5% lower and marks two consecutive months in which the totals were lower than the year-ago month. Monthly totals were higher in the other eight months of this year.

Andrew Challenger, vice-president of the outplacement firm, said, “For the most part, job cut announcements are holding steady as we enter the final quarter of the year. We’ve seen increases in certain industries, particularly those experiencing disruptions from new technologies, uncertainty from government regulation or issues with trade, or slumping from demand shifts.”

Job losses for the year to date in the automotive sector total 43,025, a year-over-year increase of nearly 200%. In the industrial goods sector that includes manufacturing workers, job losses total 63,505 so far this year, up by more than 180% compared with losses in the first 10 months of 2018. 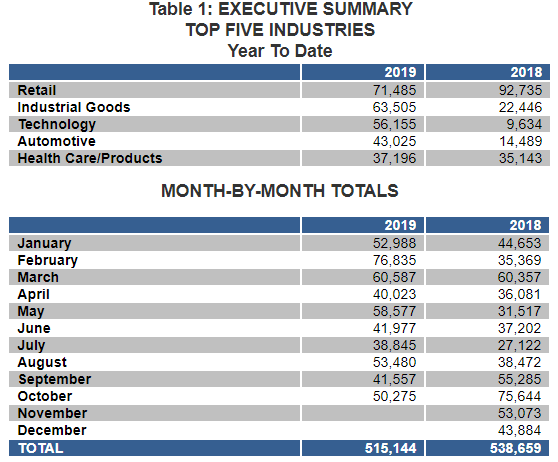