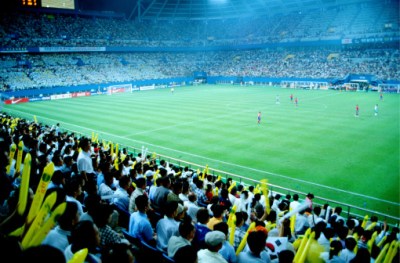 Source: Thinkstock
At 6 p.m. ET Sunday evening, the U.S. men’s national soccer team takes to the pitch in the middle of the Amazonian jungle to play the national team from Portugal in a World Cup group match that could determine whether or not the Americans play through to the elimination round. Chances are pretty high that 15 years ago many readers wouldn’t have understood what that sentence was all about.

That’s not the case today. Some 16 million American TV viewers watched the first U.S. World Cup match from Brazil on Monday making it the highest-rated men’s soccer match ever. The game was televised by The Walt Disney Co.’s (NYSE: DIS) ESPN and Spanish-language cable network Univision. That’s nearly as many viewers as the 18 million who watched the fifth and final game of this year’s NBA playoffs between the Miami Hat and the San Antonio Spurs. And it’s more than the average of 14.9 million viewers for the last baseball World Series and more than triple the average of 5 million who watched hockey’s Stanley Cup championships.

The most watched TV program ever was last February’s NFL Super Bowl, with 112 million viewers. The average number of viewers for a regular season NFL game on Fox is 21.2 million, so it’s safe to say that football still rules in the U.S. Some 1 million boys play high school football, double the 500,000 who play basketball, and nearly four times the 284,000 boys who play high school soccer.

The point of all these numbers is that when it comes to TV, live sports rules. Comcast Corp.’s (NASDAQ: CMCSA) NBC in 2012 broadcast both the Winter Olympics and the Super Bowl. Without that programming in 2013, the network’s ratings fell 20%.

Live sports, awards shows, and — less and less — reality-show contests like American Idol are the primary reason to subscribe to pay TV. The DVR and streaming have changed the way Americans watch TV. The most watched show on Comcast video-on-demand system in 2013 — PBS’s Downton Abbey. No one except hard-core fans who are watching a particular game for the umpteenth time watches a sports event after the game is over.

This Is the Biggest Box Office Hit Since 2000

Oversight Board Cuts the Baby in Half Because Facebook Wouldn't

This Is the Actor Who Made Hollywood the Most Money