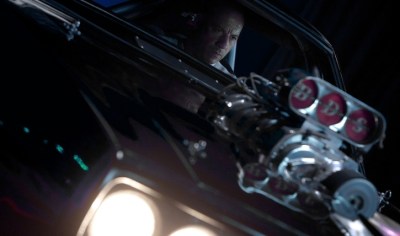 Source: Universal Studios/Comcast Corp.
The latest installment of the Fast and Furious franchise opens on 4,004 U.S. movie screens Friday, after a sneak peek at the IMAX version on Wednesday. “Furious 7,” the, um, seventh title in the series from Comcast Corp. (NASDAQ: CMCSA) and Universal Studios, is expected to sell $110 million in domestic tickets for the three-day weekend.

The franchise has grossed $937.8 million in U.S. ticket sales since the first film was released in the summer of 2001. Actor Paul Walker, who died during the making of “Furious 7,” appeared in six of the seven films. Walker’s death halted production on the movie for several months.

“Furious 7” could be the highest grossing of all the movies in the franchise, according to Box Office Mojo. Here is a brief rundown of how well the first six films have done:

Number 7 is expected to top number 6 for the opening weekend, but there is some stiff competition. The NCAA men’s basketball Final Four games take place Saturday, and Sunday is Easter.

ALSO READ: Does Netflix Face Too Much Competition?