Weak stocks in a strong market generally are not very well received by shareholders. Shares of Walt Disney Co. (NYSE: DIS) had been trying to form a bottom above $100 in recent weeks, but unfortunately some weak stocks are bound to stay weak. And by staying weak, that means getting weaker — perhaps with more downside ahead.

Where things get tough for Disney investors is that Disney’s chart is now one in trouble. And now there are three interruptions in the business model, and perhaps a fourth risk.

The newest issue is Florida’s Disney operations for park tickets and hotels and Disney Cruise sales feeling the impact of Hurricane Irma. This can be partly insured, but the reality is that Disney’s operations had largely been unaffected in recent years due to lighter loss events tied to weather.

The ongoing issue of ESPN has been a drag, even after cost cutting. The loss of subscribers has hurt, and the lack of exciting content and personalities outside of the live games makes that exodus likely to continue.

And of course the ongoing streaming exit with Netflix Inc. (NASDAQ: NFLX) is a potential risk if Disney does not properly execute. Iger has now said that Disney will include Star Wars and Marvel films on its new video streaming service. It also will produce new films and series for that streaming service.

A fourth risk is that the Star Wars franchise just took a hit with the director of Episode IX leaving Lucasfilm’s production. That film’s release is scheduled for May of 2019, and that is after The Last Jedi (Episode VIII) comes out in December of 2017. This was the second Star Wars director disruption this year after Lucasfilm’s Han Solo standalone movie parted ways with directors Phil Lord and Christopher Miller very far into production, but Ron Howard took over and the May 2018 release date was still seen as current.

Back to that stock chart. If you look at a three-year chart from Stockcharts.com, Disney shares may need to go back down toward $90 before long-term investors feel comfortable investing again. That level and points just under $90 had acted as crucial support three different times over the past three years. And after peaking at almost $120 in 2015, Disney shares had experienced four different waves of lower-highs before this last drop.

Whether short sellers knew anything was wrong is hard to know. They probably didn’t know about hurricane season, but the August 15 short interest in Disney shares was 20,295,408, up about 25% from the 16,221,535 shares short on the last day of July. That represents just about two days to cover.

Another issue, outside of Disney’s own woes, was that Wells Fargo had just raised its rating on Disney the prior day. Its rating went to Outperform with $116 target price. Prior to the Wells Fargo blunder, Loop Capital maintained a Hold rating and lowered its target price to $106 from $107, after having lowered the target in the same month.

Disney is still a great company and it still will probably do well for long-term investors who can stomach the fresh pain. That being said, there may be some additional weakness in the coming days and weeks, if the chart patterns of the past offer any guidance ahead.

Technical investors and pure chartists generally assume that weak stocks tend to stay weak for longer. They also tend to assume that lower and lower highs on each recovery attempt do not usually generate any strong conviction for investors. 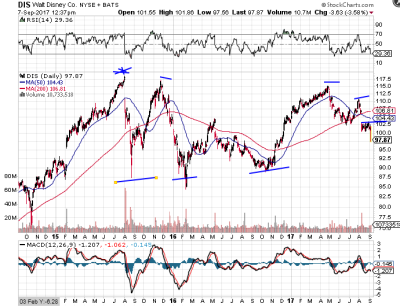