The U.S. car market already had been experiencing “peak auto” sales trends long before the coronavirus showed up and took a wrecking ball to the global economy. Now auto sales are more or less on hold since so many workers have been furloughed or fired and since so many cannot even leave home. If there is one part of the car market that may hold up, look no further than Sirius XM Holdings Inc. (NASDAQ: SIRI) for its dominance in satellite radio placement in new cars and used cars alike.

Investors are looking for companies that are likely to withstand the carnage of the recession in the coming months. If the global financial crisis that unfolded from 2007 through 2009 is a model, Sirius XM should come out just fine. Its service basically costs $100 per year for one car, and it seems drivers have not been cancel. Plus, in the recession this time around, Sirius XM also has Pandora as an offering.

Citigroup has upgraded Sirius XM now that the stock has been beaten down with the broader stock market. Analyst Jason Bazinet raised it to Buy from Neutral but did lower the old $7 price target to $5.90. Sirius XM closed at $4.81 ahead of the call.

This valuation upgrade comes after Sirius XM shares had fallen about 35% from the peak, and Bazinet already expects that whatever guidance was given ahead of the coronavirus impact is now off the table for 2020. The question is whether Bazinet’s new assumptions are conservative enough.

His revenue projection is $7.9 billion, and the company’s prior guidance was $8.1 billion or so. His target for 2020 earnings before interest, taxes, depreciation and amortization was down at $2.367 billion (from $2.5 billion). His target on free cash flow dropped to $1.54 billion from the $1.7 billion that had been offered by the company.

As with most valuation upgrades, the assumption is that the weaker numbers should be baked into the stock.

Where the call gets rather interesting is in the shares of Liberty SiriusXM Group (NASDAQ: LSXMA). Citi sees this trading at a 34% discount to the value of the Sirius XM controlling stake. This means that the primary upgrade n Sirius XM offers a twofold benefit for the Liberty Sirius XM shareholders.

With many other trackers, shareholders are likely worried about the overall health of Liberty Media in the current environment. Bazinet’s take is that he does not see material risks. One issue in which Bazinet also sees upside potential is that the company may try to take advantage of the weak share prices in this weak economy to consolidate or bolster its holdings.

If Liberty Sirius uses liquidity to one of the other trackers it could pressure liquidity but would not hurt its enterprise value or equity value.

In another call out there, Pivotal Research maintained its Buy rating on Sirius XM while cutting its target price to $7.25 from $8.25.

ALSO READ: Why Big Pharmaceutical Stocks May Be the Best Place for Worried Investors Now

The chart from Stockcharts.com below shows just how bad March was on shares of Sirius XM. 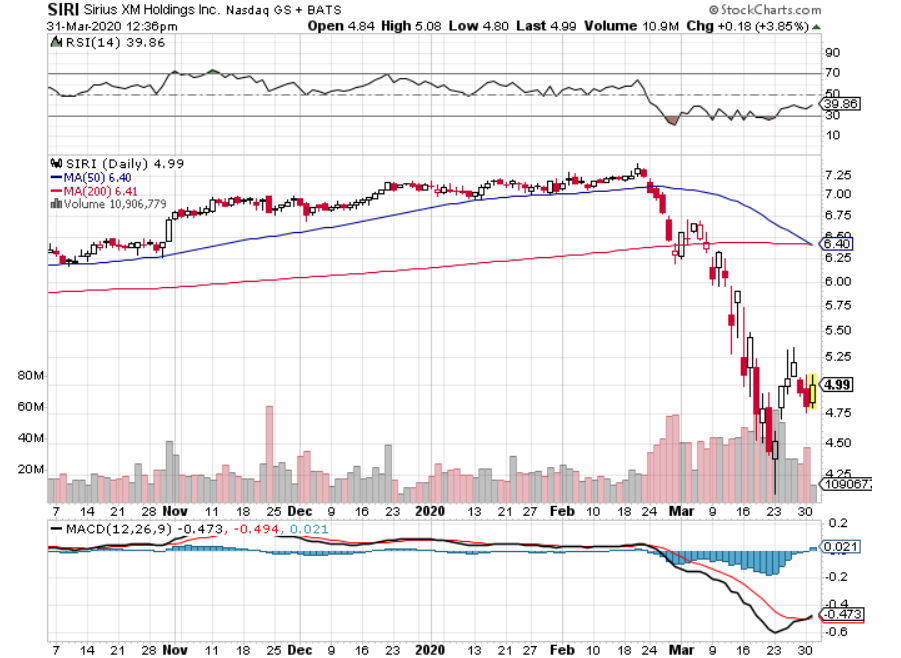