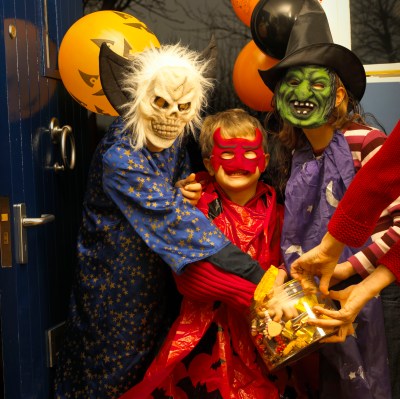 Source: Thinkstock
Of the total $6.9 billion that the National Retail Federation (NRF) expects U.S. consumers to spend on Halloween celebrations in 2015, more than one-third of that amount will be spent on candy. The National Confectioners Association (NCA) expects Americans to spend $2.6 billion on candy this year.

In 2014, the NRF reckoned total spending on Halloween at $7.4 billion of which the NCA figured candy would nab about $2.5 billion. According to the NRF, the average 2015 Halloween celebrant will spend $74.34, down from $77.42 in 2014. Here’s how the retailers figure Americans will be spending their money:

Consumers celebrating Halloween plan to spend an average of $27.33 on costumes for the whole family, and a total of $2.5 billion on store-bought, homemade, large and small costumes. Those celebrating will spend the most on adult costumes ($1.2 billion), and will spend a total of $950 million on children’s costumes and $350 million on fashionable and fun costumes for their furry friends. It’s estimated that 68 million Americans will dress up this Halloween and another 20 million pet owners will dress up their pet.

Spending on decorations is expected to reach $1.9 billion and consumers are expected to spend another $330 million on greeting cards.

Halloween continues to be the top candy-giving holiday with 86% of people giving or sharing chocolate or other candy. Parents support the notion that sharing is a critical piece of the Halloween celebration – a full 80% report that they enjoy some of their children’s Halloween bounty by either sneaking it when the kids aren’t looking (23%) or by instituting a house rule that it must be shared (57%).

Nearly 20% of consumers say they are more likely to buy seasonal candy in smaller portion sizes than they have in the previous five years.

The most popular candy treat: chocolate, the favorite of 70% of Americans. Candy corn (our personal favorite for the day) trailed in a distant second with 13%. Other top choices are chewy candy (6%) and gummy candy (5%).

According to the NCA more than 75% of survey respondents said they plan to hand out candy to Halloween trick-or-treaters this year. Some 60% will pass out the candy themselves rather than let the little goblins dig in for themselves. And those who are passing out the candy think that two pieces is plenty.