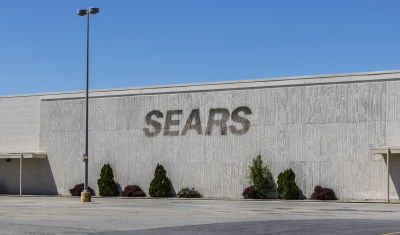 Sears already has secured $300 million from a consortium of banks, including Citigroup, Bank of America and Wells Fargo. Lampert’s $300 million loan, if it can be arranged, would add to, not replace, the bank loan.

Reuters also notes that “some people” have been telling Lampert that he should try to come up with an additional $300 million to replace the banks’ debtor-in-possession loan. By contributing $600 million to Sears, Lampert (and his partner, if he can find one) would put itself first in line to be repaid. The proposed loan from the banks would be first to be repaid as things now stand.

A week ago today Sears filed for bankruptcy protection saying it would close 142 stores, keeping some 512 stores open through the end of the year. Of that number, the plan calls for 400 of the best performing stores to be sold at auction in January.

There’s no reason to keep more than 100 non-performing stores open through the holiday season. Is Sears expecting a visit from Santa that will magically stock the shelves only with goods that customers want and that, somehow, the company will sell all those goods at full-price and that Sears will be saved?

Lampert, who stepped down as Sears’ CEO when bankruptcy papers were filed, has indicated that he and his hedge fund, ESL Investments, plan to bid for the stores at the time of the auction. Lampert also has offered to buy the Kenmore appliance brand, along with part of the company’s home services business, for $480 million, but the Sears board has so far been unwilling to accept that offer.

The bankruptcy court is expected to hold a hearing next week to finalize bankruptcy financing for Sears.