Walmart Inc. (NYSE: WMT) stores will be open all day on Thanksgiving, with special pricing on in-store deals beginning at 6 p.m. local time. To draw early buyers, it will start online sales before the Black Friday weekend as it tries to pull customers from other retailers that will open early on Thanksgiving as well.

Walmart promotions, based on research from BestBlackFriday.com, open with e-commerce discounts that will start on Wednesday, Nov. 21, at 10 p.m. EST. The discounts on items sold on Walmart.com will mostly mirror those at stores.

Many of the most discounted items among Walmart’s early promotions are consumer electronics, which puts the world’s largest retailer into direct competition with Best Buy and Amazon.com. This includes sales on television displays, iPhones, video games and video game consoles. Other sales that are part of Walmart’s early promotions are spread across dozens of categories and hundreds of products. Some items are only available in stores, probably as a means to create foot traffic, likely in the hope that people who will shop for one item will buy others as they pass through the aisles.

Among the early deals:

iPhone 6 models will be available on Straight Talk or Total Wireless, which are wireless companies that do not require customers to buy long-term wireless plans. The price for this “bundle” is $99, which Walmart claims is a $50 savings off the normal price.

Walmart has married a Sony PS4 1TB Slim with a Spider-Man video game for $199. Walmart calls this a “special buy,” which presumably means it is a major discount.

Walmart will sell a Sharp or TCL 65-inch Class 4K Roku Smart TV for $398. Roku is one of the “cord cutting” devices that compete with cable television subscriptions.

Other promotions include a Hisense 40-inch Class 1080p TV for $99. Hisense’s largest market is China. Its primary products are smart screens and appliances. Walmart also is offering a Hisense 55-inch Class 4K Roku Smart TV for $248.

Walmart’s sale of a Google Home Hub for $99 puts it in competition with Amazon’s Echo Dot.

Among the other most prominent discounts is a Pac-Man or Galaga Retro Arcade Machine for $249, which is a $50 discount from the normal price; an HP 15-inch Touch Notebook for $259; a Microsoft Xbox One X 1TB Console for $399; and a $300 gift card on Apple iPhone XS, XS Max or XR. 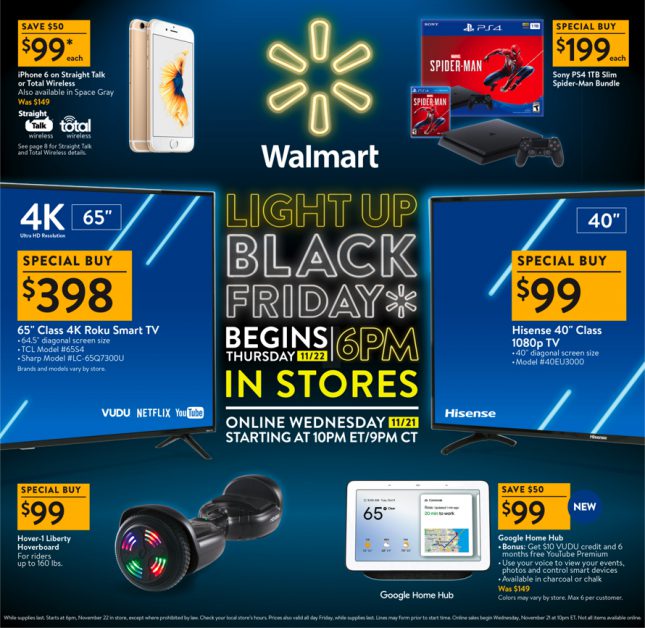