Why Rite Aid Stock Is Taking Another Bounce

On April 22 last year, Rite Aid Corp. (NYSE: RAD) completed a one-for-20 reverse stock split, lifting the share price from about $0.45 to around $9.00. On Wednesday, shares closed at $12.87 and have jumped to as high as $16.25 following the company’s fiscal first-quarter earnings report.

The following chart shows Rite Aid’s share price moves since early November of last year. The big spike in December followed quarterly earnings, as did the spike in March. 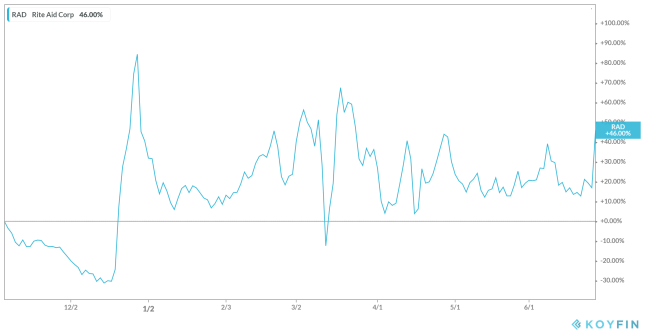 Since its reverse stock split, Rite Aid shares have risen by nearly 20% as of Wednesday’s closing price. Shares of Walgreens Boot Alliance Inc. (NASDAQ: WBA) have lost just over 20% in the same period, while CVS Corp. (NYSE: CVS) has added more than 24%.

The rise and eventual fall of Rite Aid stock could be due in part to short covering. Over the past 10 trading days, short interest in Rite Aid has more than doubled, and about 26.4% of the company’s float was short as of Wednesday’s close. Rather than continue playing the short bet, some short sellers may have just decided to cut their losses.

Interestingly, though, there appear to be fewer short sellers who want to exit their short position every time Rite Aid stock spikes following an unexpectedly good earnings report. Analysts at Evercore ISI put a Sell rating on the stock in August of 2019, while Guggenheim and Deutsche Bank both lifted Sell ratings this year to Hold. That’s it for current analyst ratings.

While Rite Aid has performed well over the past six months or so, investors simply aren’t committed to the stock. The company pays no dividend, so it has to be thought of as a growth play and that is a hard position to sell.