Which Hotel Rewards Program Is Best?

By now every traveler is familiar with loyalty programs sponsored by airlines, car rental companies and hotels. Piling up reward points that can be used to get free flights, car rentals and hotel rooms has probably become something of a national pastime among Americans who travel a lot.

To them, perhaps, it is no surprise that not all those reward points were created equal. Among infrequent or moderately frequent travelers, however, figuring out which program is best may be more trouble than it’s worth.

According to the report, “For each query, the lowest reward price in points was recorded along with the corresponding room price in US dollars. The value provided by points was adjusted to consider the different rates of point accrual for the programs. The result provides an average ‘reward payback’ for each program … .” Here are the results:

These returns are averages. When IdeaWorksCompany and Switchfly searched through the data for the survey period (August 2016 through February 2017) they discovered some really outstanding deals and some not-so outstanding. Here are the highest and lowest reward paybacks for the period studied: 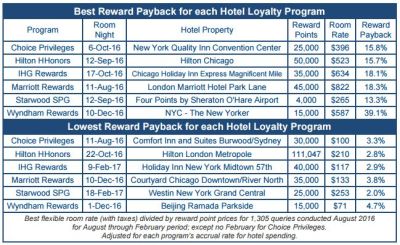 Reward payback represents just one method of comparing hotel loyalty programs. But for those consumers intent on maximizing the return on a dollar, euro, or peso spent on overnight accommodations, the results can be very dramatic. Very few everyday choices in life yield paybacks that can range from 2 to 39 percent.

Details and more discussion are available at the IdeaWorksCompany website.

Is Now the Time to Bet on Airbnb?