American Cities Where Manufacturing Is Booming 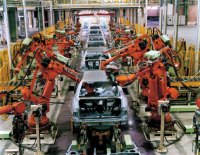 Last Friday, President Obama pointed to the improving labor market as a sign the economy is recovering. According to the jobs report released last week, companies hired more than 200,000 workers for the third consecutive month in February. The president, speaking to workers at a Rolls-Royce aircraft parts plant in Virginia, touted the 31,000 new manufacturing jobs, and suggested that manufacturing was fueling the recovery.

Indeed, manufacturing and exports appear to have been driving growth for some time, albeit slowly. According to a new Brookings report, U.S. exports, which represent 10.7% of gross domestic product, grew 11% in 2010, the fastest growth since 1997. The bulk of this growth, 75%, came from manufacturing.

In order to illustrate how export and manufacturing are fueling the economy, Brookings looked at exports in the 100 largest metropolitan areas in 2009 and 2010. Based on the Brookings report, 24/7 Wall St. identified the 10 cities where manufacturing fueled export growth the most.

Most of the cities where manufacturing is booming were once major industrial centers. Cities like Cleveland and Milwaukee were manufacturing hubs as early as the mid 1800s. In the late 1970s, however, manufacturing began declining and today represents only a fraction of GDP in these areas. Other industries have since taken larger shares of GDP and employment. For example, in Toledo, which was once a leader in auto manufacturing, the health care industry is now the city’s biggest employer. Today, manufacturing only accounts for 13% of the labor force in the metropolitan region.

For this reason, the impact manufacturing has had on these cities can be hard to detect. According to the Bureau of Economic Analysis, while exports have grown substantially in these regions, total GDP has not. Between 2009 and 2010, GDP grew at or below the national rate of 2.5% in six of the 10 cities.

It is clear these cities have some ways go before manufacturing’s impact is readily seen. Median income in these areas remains among the lowest in the country. Six of the 10 metropolitan areas are in the bottom third among major cities for income. Toledo, for example, has a median household income of just $43,260, the 11th lowest in the country. In many of these cities, median income fell even as manufacturing jobs increased. In fact, only one city of the 10 showed an increase in income. Meanwhile, the declines in income in the other cities were among the worst in the country.

These are the 10 cities where manufacturing is booming.