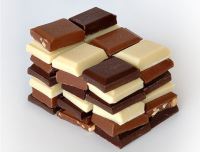 Americans love chocolate. Apparently, Easter Week is one of the most popular times of the year to indulge. Nearly 71 million pounds of chocolate candy are sold in the week leading up to Easter, according to a 2009 Nielsen report. Second only to Halloween, more than 20 million more pounds of chocolate are sold during Easter than Valentine’s Day.

But what kinds of chocolate do Americans like the best? 24/7 Wall St. reviewed the brands that consumers buy most to identify the top 10 most popular chocolates in the country.

Two companies dominate the list: Mars Inc. and the Hershey Company (NYSE: HSY). The two produce every brand among the top 10 most popular chocolate candies. With each producing five of the top 10 brands, the chocolate giants are in fierce competition.

24/7 Wall St. ranked the candies by units sold in supermarkets, drugstores, gas stations, convenience stores and mass market retailers (excluding Walmart) in the 52 weeks that ended March 18, 2012, based on data provided by SymphonyIRI Group, a Chicago-based market research firm. According to SymphonyIRI’s methodology, chocolate candy sizes fall into one of three categories: candy weighing less than 3.5 oz, candy weighing more than 3.5 oz, and snack size. Our ranking is based on sales of candy units weighing less than 3.5 ounces, the size of an average American candy bar.

These are America’s favorite chocolate brands.