America's Most (And Least) Expensive Thanksgivings 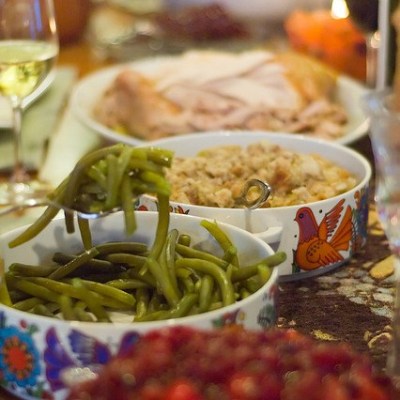 The cost of Thanksgiving dinner has gone up over the years. It averaged $34.56 in 2002 and now is nearly $50. But depending on where you live and where you shop, your family could spend less than $35 for turkey and all the trimmings this year — or nearly than two and a half times that amount.

The American Farm Bureau Federation identified the 12 basic grocery items used to make a standard Thanksgiving meal for ten. Based on cost-of-living data calculated by the Council for Community and Economic Research, 24/7 Wall St. determined how much this meal would cost at an inexpensive supermarket in the most inexpensive city in America, and what it would cost at an expensive supermarket in the most expensive city.

According to C2ER, the urban area with the lowest overall cost of living is Harlingen, Texas, where prices for all goods are roughly 80% of the national average. Located a few miles from the border with Mexico, Harlingen has a generally low-income or poor population. As of 2011, more than one in three residents were living below the poverty line. The median household income was just $32,714, compared to the national median household income of $50,502.

We asked a Harlingen reporter to see how much a standard Thanksgiving dinner would cost at the local Walmart. Walmart is widely regarded as one of the least expensive places to buy groceries nationwide. While a local grocery store may have lower prices, Walmart fairly represents prices at their lowest nationwide.

According to the AFBF, a basic Thanksgiving dinner for ten includes a 16-pound turkey, 12 rolls, a 1-pound relish tray of celery and carrots, a half-pint of whipping cream, 14 ounces of cubed stuffing, three pounds of sweet potatoes, one gallon of milk, 12 ounces of fresh cranberries, one pound of green peas, one 30-ounce can of pumpkin pie mix, and two pie shells. Also needed are small amounts of miscellaneous ingredients, the average national cost of which is $3.18.

On the other end of the spectrum, C2ER identified New York City’s borough of Manhattan as the most expensive urban area in the country. The cost of all goods and services there is an estimated 230% of the national average. Median income in the borough is more than double that of Harlingen, Texas. Because 24/7 Wall St. offices are located in New York, we were able to survey prices at a nearby Whole Foods — one of the higher-priced national supermarket chains — to see how much that same Thanksgiving dinner would cost a Manhattan resident.

Menu Items By Price and Location

-By Michael B. Sauter

*Included in the AFBF’s calculation are small amounts of miscellaneous ingredients used to make a Thanksgiving meal, including coffee, onions, eggs, sugar, flour, evaporated milk and butter. Due to the small size, we were unable to calculate them. As a result, the difference between the national average and the prices for the two locations does not take them into account.