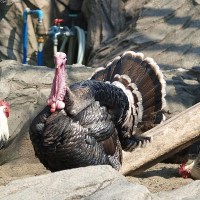 The cost of a standard American Thanksgiving dinner keeps rising. In 2001, the holiday meal cost $35.04. This upcoming holiday, it will be nearly $50. According to a report by the American Farm Bureau Federation, the price of the Thanksgiving feast increased roughly 13% from last year alone.

Of course, the main culprit for this increase is the rising cost of the food. While a relish tray decreased in price, all the other foods examined cost more. A 16-pound turkey costs nearly $4, or 22%, more than last year.  Based on AFBF’s report, 24/7 Wall St. reviewed the 11 main ingredients of a typical Thanksgiving dinner.

The AFBF’s annual report, its 26th in a row, looks at the traditional foods consumed at an average 10-person Thanksgiving dinner. The price estimates are based on Farm Bureau volunteers from around the country who report the standard food prices without using special coupons or deals.

According to the report, the foods include a 16-pound turkey, a gallon of milk, a 30-ounce can of pumpkin pie mix, a half pint of whipped cream, 14 oz. of cubed stuffing, a pound of green beans, 12 rolls, three pounds of sweet potatoes, 12 ounces of fresh cranberries, 2 pie shells, a 1-pound relish tray (carrots and celery) and various other ingredients.

24/7 wall has examined 11 of the ingredients, looking at how much the United States produces of each of these goods, and how much the prices of the basic food commodities have changed over time.

Credit Suisse: 'Let's Not Split Hairs' Over the Steel Supercycle