The 10 Most Polluted Cities in America 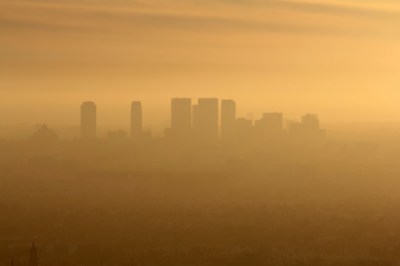 Source: Thinkstock
After making great strides in air pollution over the past decade, the United States took a small step backwards. Forty-seven percent of the U.S. population lived in areas with unhealthy levels of air pollution, slightly higher than last year. According to the American Lung Association’s 2014 “State of the Air” report, the Fresno, Calif., metro area was the most polluted city, moving ahead of Bakersfield, Calif.

The ALA’s report measures cities based on low-lying ozone pollution, as well as both short- and long-term particle pollution. These particles, just 1/30th the diameter of a human hair, are capable of getting past our bodily defenses and causing physical harm, particularly to those who already suffer from pulmonary diseases, the very young and the elderly. The report measures both the total accumulated particle pollution over the course of a year, as well as the number of days that the air pollution hit unhealthily high levels. Based on the average levels of long-term pollution measured by the report between 2010 and 2012, these are the most polluted cities in the country.

One region in the country that is not improving is California’s Central Valley, where half of the top 10 most polluted metro areas were located. A number of factors contribute to pollution there. For one, the mountain ridge that forms the valley traps in smog from Los Angeles and San Francisco and blocks rain storms that help filter the air from coming into the region.

Janice Nolen, assistant vice president of National Policy at the ALA, said that the pollution levels in those cities have improved “but just not enough — they still have a long way to go.”

Warmer temperatures contributed to high pollution levels in some metro areas. In particular, ozone pollution levels increased in 2012 because the United States had one of the hottest summers on record. “Ozone is heavily dependent on sunlight, and when it’s especially hot, it tends to cook in the atmosphere. Higher ozone levels is a trend that we saw across the nation, especially in St. Louis and Phoenix,” Nolen said.

Traffic levels in some areas also contributed to higher air pollution levels. In the El Paso area, in particular, a growing volume of commercial vehicles carrying cargo to and from Mexico added to pollution.

Nolen explained that while corporations are engaging in more environmentally friendly practices, certain industries such as power generation and steel making are still contributing to high levels of pollution. This was the case for St. Louis and Pittsburgh, both among the most polluted cities.

While we still do not know the full extent of the physical harm pollution causes, it is well established that pollution is detrimental to one’s health, Nolen said. “We know that there is a link between particle pollution and lung cancer,” she said. “But mainly, healthy adults who have chronic diseases will have a harder time dealing with pollution.”

Based on average long-term particle pollution data collected by the U.S. Environmental Protection Agency and aggregated by the ALA between 2010 and 2012, 24/7 Wall St. reviewed the 10 most polluted metropolitan statistical areas in the country. In some instances, ALA published data by combined metropolitan statistical area. In addition to year-round particle pollution, we also considered ozone pollution and short-term particle pollution by county, which the ALA measured as the weighted number of days between 2010 and 2012 where pollution levels were deemed unhealthy for some residents, or worse. Days when air pollution was most-severe received higher weights. For each of these metropolitan areas, the ALA also noted the population and the number of people in the area with asthma and COPD.

These are the 10 most polluted cities in America.