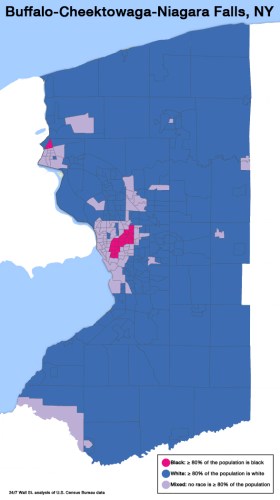 There are several ways to measure segregation, and Buffalo has among the most severe divisions along racial lines no matter the measure. While nationwide 23.9% of black
Americans live in primarily black neighborhoods, in Buffalo 42.2% do. Based on the exposure index, another standard measure of segregation, only 5% of all white interactions in a given day are with their fellow black residents.

Residential segregation almost always accompanies stark economic disparities. Arguably, no city is more unequal than Buffalo. While 36.4% of the metropolitan area’s black residents live in poverty, only 9.7% of the area’s white residents do. The city’s white adults are more than twice as likely to have a college degree as black residents. The typical African American household in Buffalo earns just $25,789 annually, or just 46.2% of the area’s white median household income. Nationwide, the black household median income is 60.7% of the white household median income.

The St. Louis region earned a national spotlight in the summer of 2015 when Michael Brown, a black teenager, was shot and killed by police in Ferguson, sparking protests across the nation. Ferguson is a predominantly black neighborhood — and Brown’s death is inseparable from racial segregation in the area. One of the most damaging effects of residential segregation is funding disparities between neighboring school districts. Because property taxes play such a large role in school funding, well-off communities often
have an interest in keeping poor areas separate.

Instead of one, St. Louis has 24, quite disparate school districts. This August, water fountains in 30 predominantly black St. Louis public schools were shut down due to lead 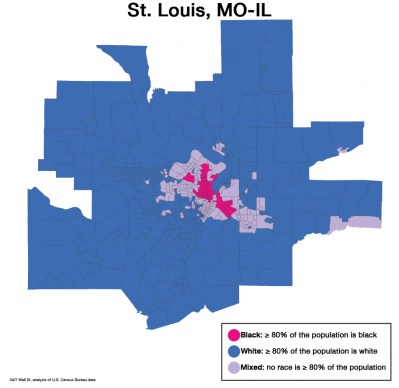 contamination. Some of the area’s wealthiest communities with some of the best funded schools are less than 20 miles away, and with state-of-art facilities, have reliable clean water.

There are a number of ways to measure segregation. Nearly 45% of Cleveland’s black residents live in neighborhoods that are at least 80% black. There are numerous methods used to measure segregation. One measure, of exposure to other races, pages the Cleveland area at nearly the most segregated. Across the nation, about 37% of the people the average white American encounters are also white. In Cleveland, the share is 84.7%. 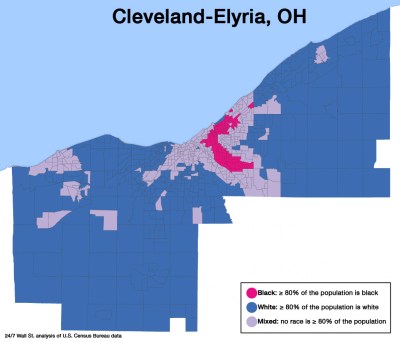 Like most major metropolitan areas, racially segregated neighborhoods in the Cleveland area — as well as the socioeconomic inequalities in these neighborhoods — are at least in part a consequence of racially conscious discrimination. During the early 1900’s, black families could only access housing on the east side of the city, which is where all predominately black neighborhoods can be found today.