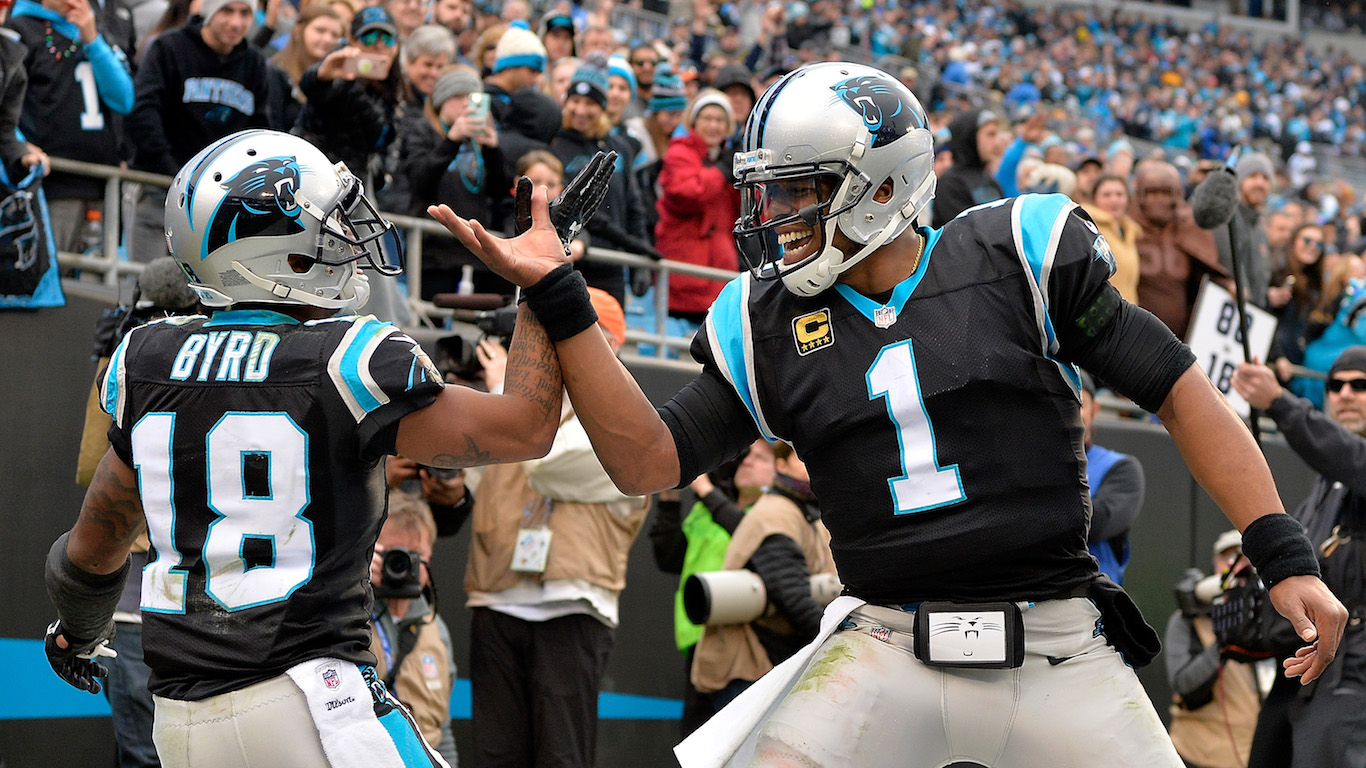 Carolina (10-4) can capture a playoff berth with a win over the Bucs, who are out of the postseason picture. The Panthers are coming off a 31-24 win over Aaron Rodgers and the Packers. Here are two reasons the Panthers are favored — quarterback Cam Newton and a defense that’s ranked fifth in the NFL, allowing just 307.9 yards per game. Newton threw four touchdown passes on Sunday to spoil Rodgers’ return from a broken collarbone. Plus Newton gets big assists from running back Christian McCaffrey and wide receiver Greg Olsen.

The Bucs (4-10), who have lost four straight, fall in the disappointment category once again, extending their streak of missing the playoffs to 10 seasons. Quarterback Jameis Winston (shoulder) hasn’t been at peak health and it shows. 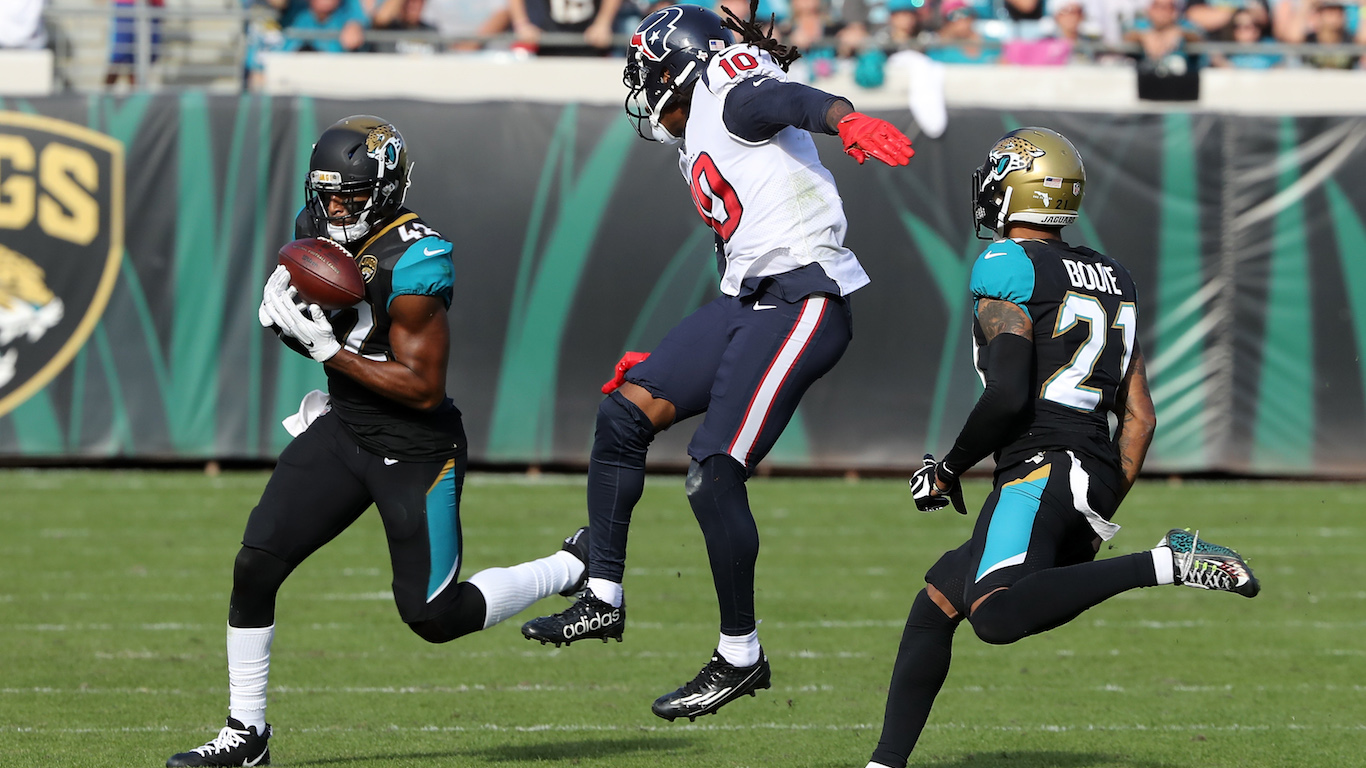 The Jaguars (10-4), who have won three straight, clinched their first playoff spot in 10 years with a 45-7 win over the Texans. It’s clear why they’re favored. In the past three games, quarterback Blake Bortles completed 71.4% of his passes for 903 yards, seven touchdowns, and zero interceptions, and Jacksonville has scored at least 30 points in each of those games. He is the definition of red-hot. It’s not all Bortles. Jacksonville has the NFL’s best rushing offense (149.1 yards per game). The Jaguars’ defense is ranked first in the league in points scored per game (14.9) and is tops against the pass, giving up a measly 168.9 passing yards per game.

The 49ers (4-10) have come to life since Jimmy Garoppolo was handed the reins. He’s 3-0 as a starter, including the 25-23 win over Tennessee in Week 15. No playoff hopes for this bunch, but next year is looking much brighter if they bring back Garoppolo. Wide receiver Marquise Goodwin has averaged 106 receiving yards with Garoppolo as a starter. 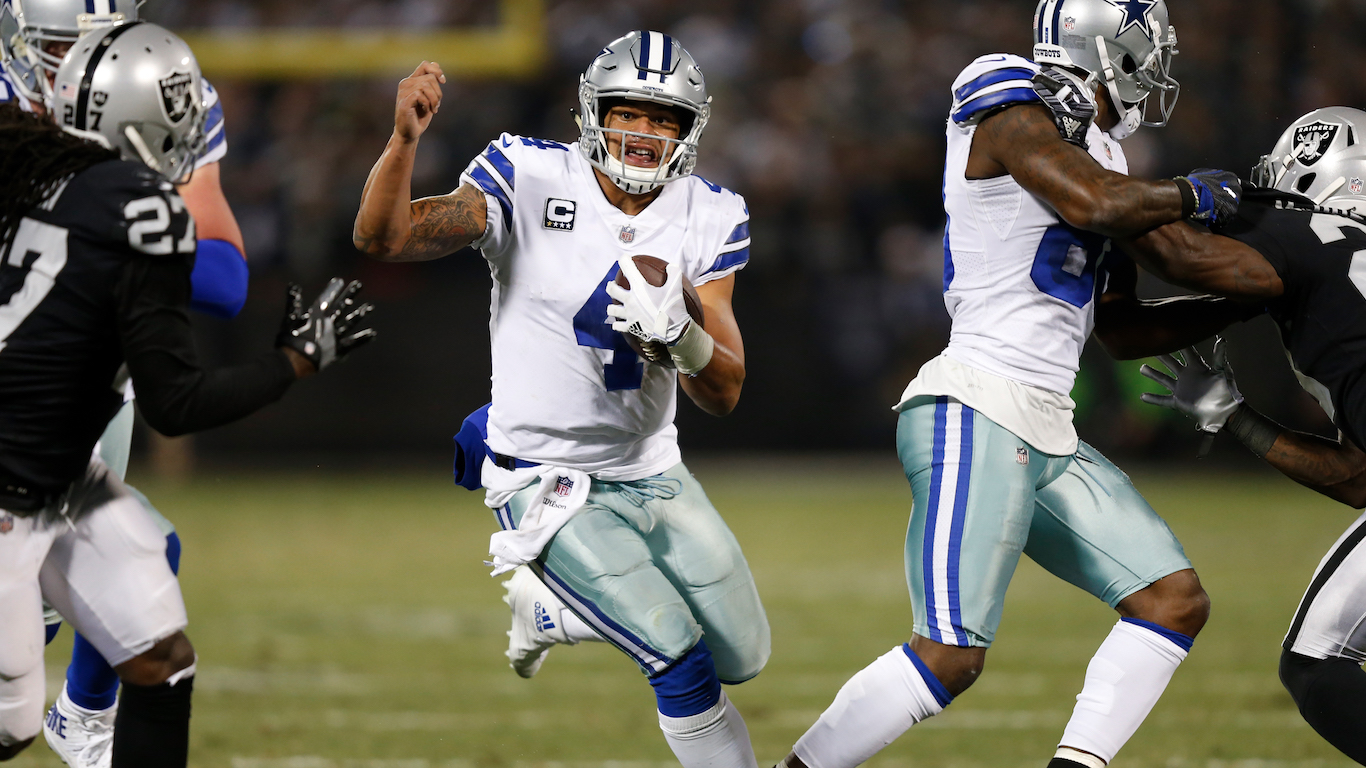 This matchup has postseason implications for both teams. The loser will be eliminated from playoff contention, while the winner will have a chance at a wild-card spot, but will need help. The favored Cowboys (8-6) have won three straight, including Sunday’s 20-17 win over the Raiders. Over those three games, the Dallas defense yielded just 41 points. Running back Ezekiel Elliott will return following a six-game suspension. It’s uncertain how much action he will see. In the eight games prior to his suspension, he had 783 rushing yards and seven touchdowns. He averages 97.9 rushing yards per game and leads the NFL. Elliott has been missed and could provide a spark, which is exactly what the Cowboys need.

Meanwhile, the Seahawks (8-6) have lost two straight and three of their last five. They were routed by the Rams, 42-7, on Sunday. Quarterback Russell Wilson completed 14 of 30 passes for a paltry 142 yards, but it is amazing he accomplished that considering he was sacked seven times. Certainly they have a shot at topping the Cowboys. Wilson can never be counted out. 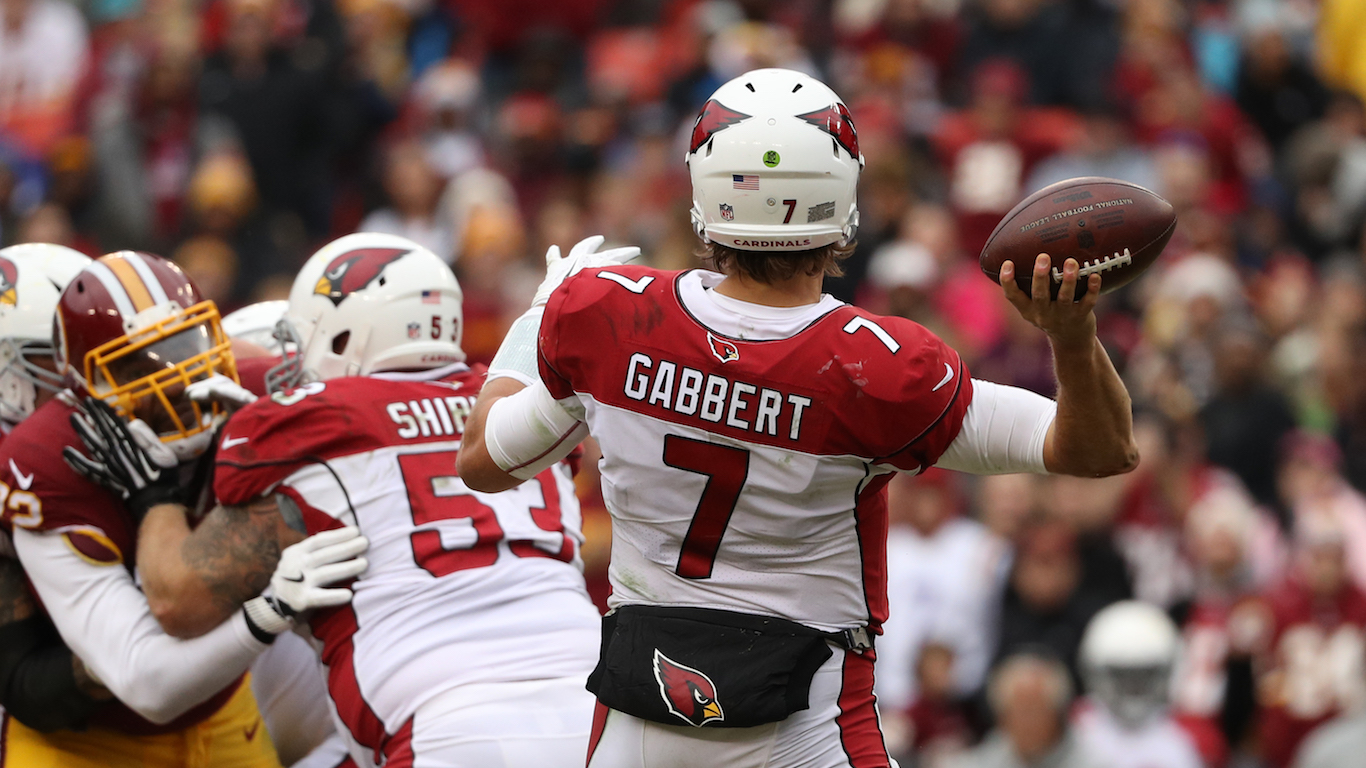 Postseason? Not for either of these teams. The Cardinals (6-8) are making a switch to Drew Stanton at quarterback from Blaine Gabbert after a 20-15 loss to the Redskins. Coach Bruce Arians said Stanton gives the Cardinals the best chance to win. It will be Stanton’s third start this season.

The woebegone Giants (2-12) only drew headlines this season when former Coach Ben McAdoo benched Eli Manning for what turned out to be McAdoo’s last game as coach. The last time the Giants lost as many as 12 games in one season was in 2003. The Giants did give the Eagles a game on Sunday before losing 34-29. In fact, the Giants led 23-21 at the half. Manning threw three touchdown passes and one interception to bring his season total to 18 touchdowns and 10 picks. 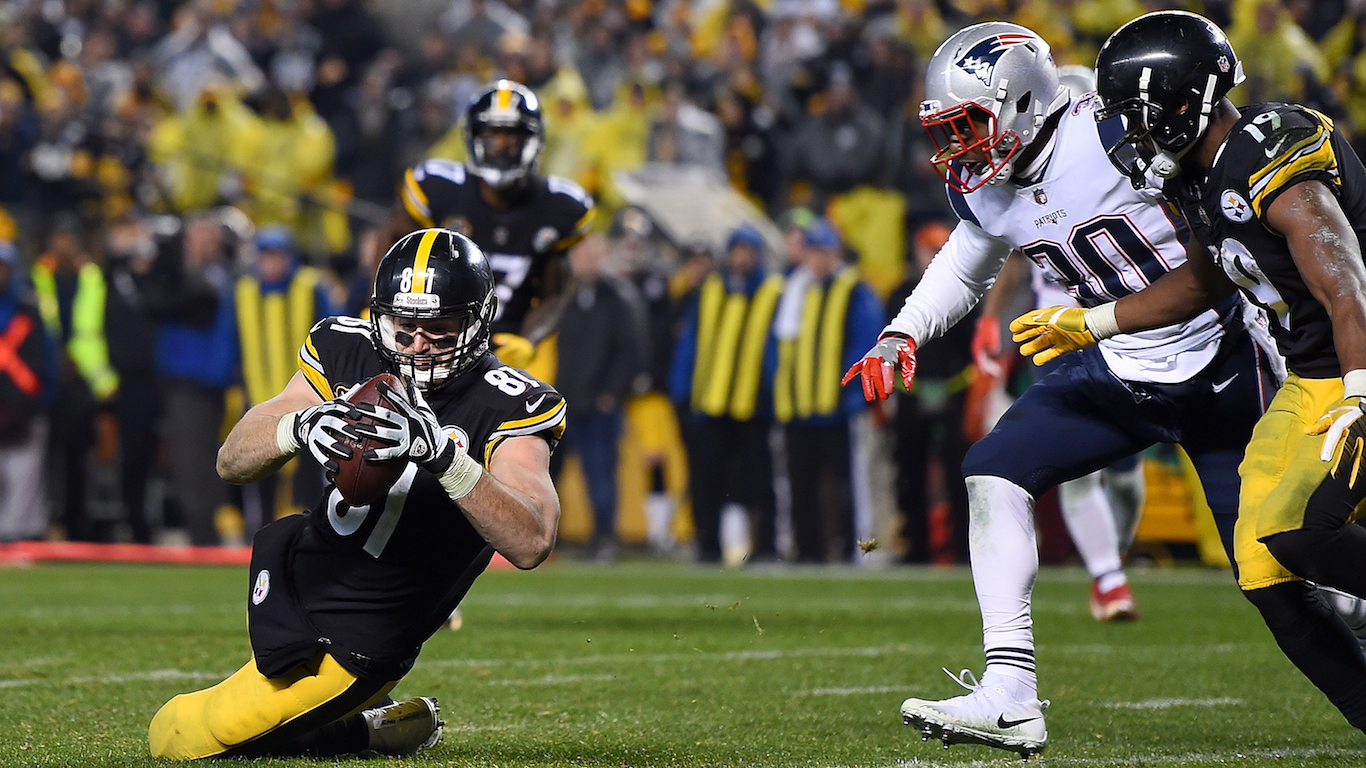 No NFL team would want to take Houston’s place in this matchup. The Steelers (11-3) are still reeling from their 27-24 loss to the Patriots on a controversial no-touchdown call followed by a hurried-up play when Ben Roethlisberger threw an interception in the end zone to end the game. The Steelers can clinch a playoff bye with a win over the Texans by topping Cleveland in Week 17. The Steelers, always a tough team to face, are also playing for their fallen teammate Ryan Shazier, who suffered a severe spinal injury in Week 13 against Cincinnati. Plus, the game against Houston will be played on Christmas night. A little emotion can go a long way.

The Texans (4-10) have lost seven of their last eight. They gave up their playoff hopes months ago. They miss quarterback Deshaun Watson and defensive end J.J. Watt. Who wouldn’t? 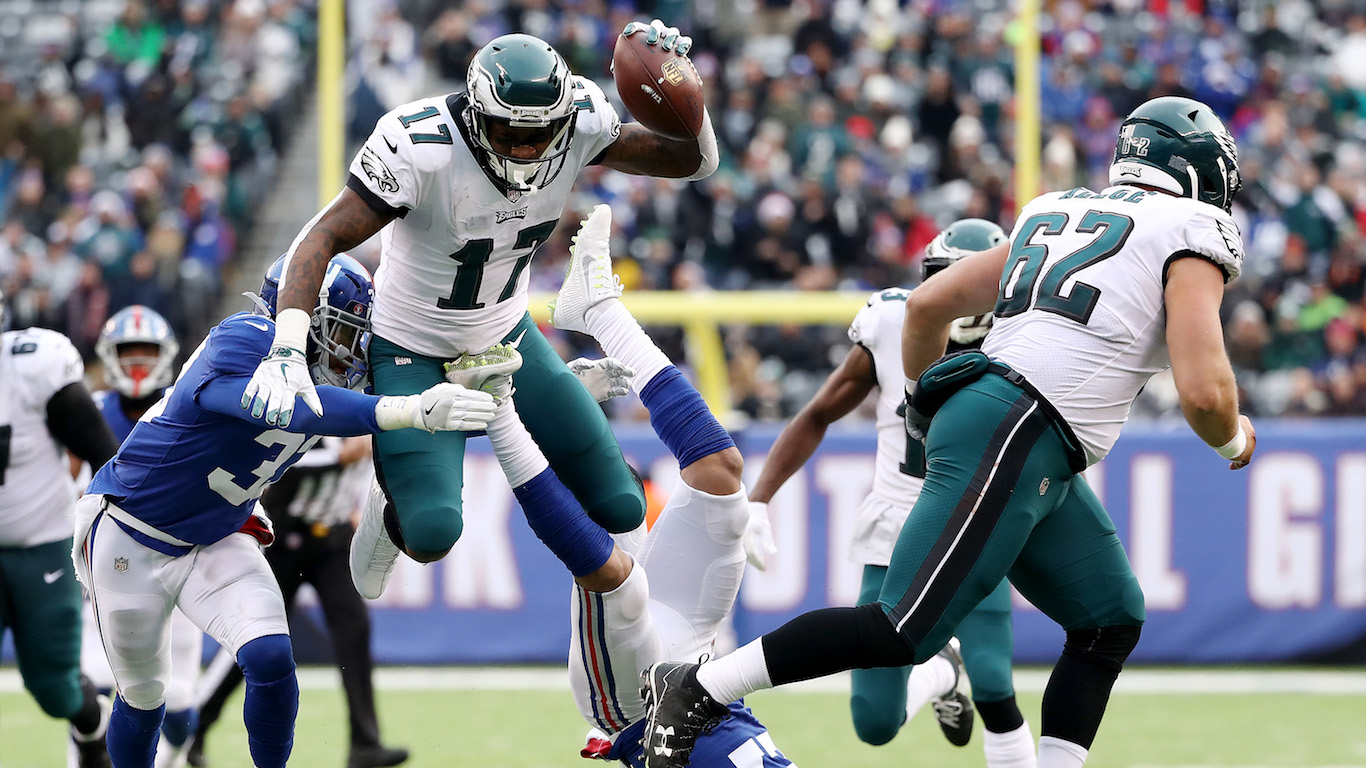 The favored Eagles (12-2) are in the playoffs, and with one more win or a Vikings loss they could clinch home-field advantage. Even without injured quarterback Carson Wentz, the Eagles are favored. A capable Nick Foles filled in last week in the 34-29 win over the Giants. Foles threw four touchdown passes and no interceptions. The defense, though, needs to tighten up after allowing the woeful Giants 504 total yards. The Eagles have the best run defense in the league, allowing just 71.5 yards per game.

The Raiders (6-8) have slim playoff hopes, but other teams could wreck their Christmas. Oakland needs to win and also needs the Chargers, Bills, and Titans to lose. If one of those three teams wins on Sunday, the Raiders are out of the playoffs before they kick off on Christmas Day.