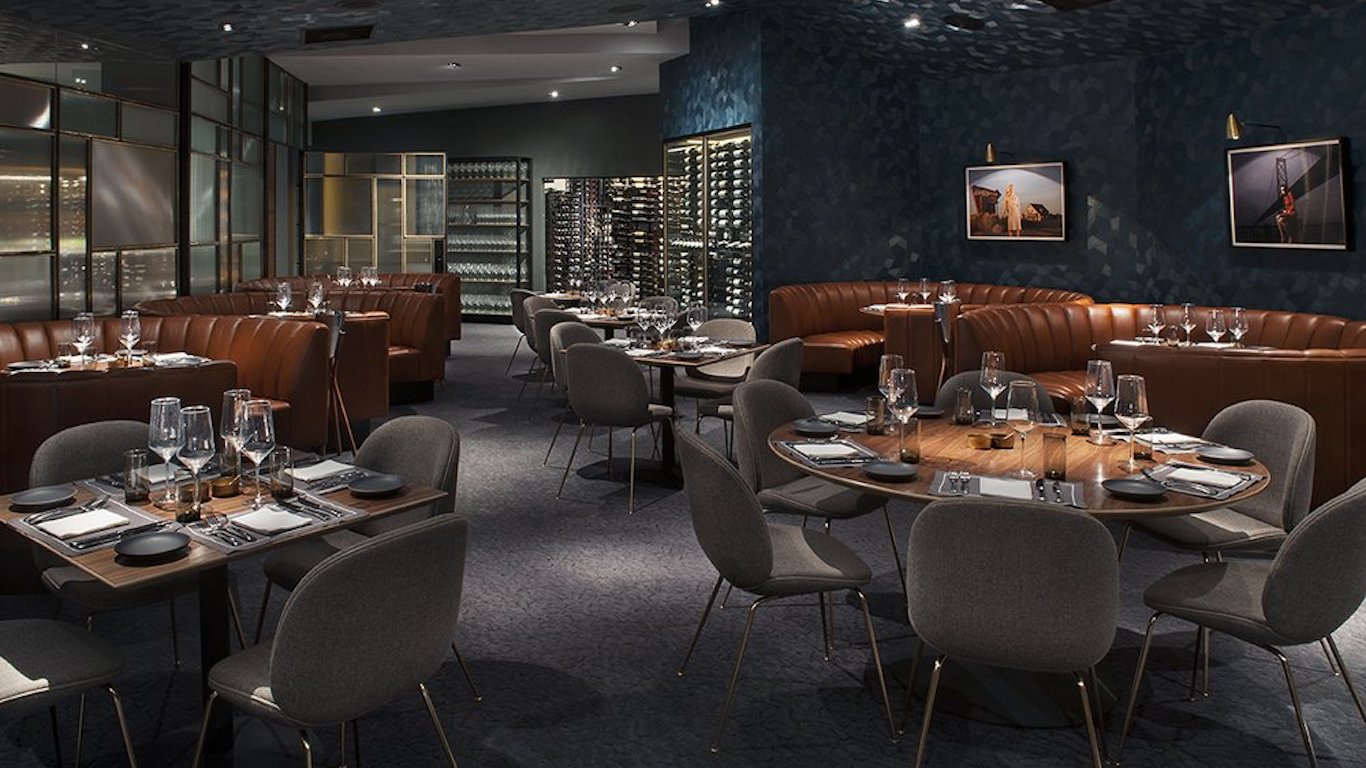 German-born but trained in some of the best restaurants in France, Joachim Splichal — a James Beard Best Chef winner — gained fame with his Patina restaurant, which remains one of L.A.’s finest after almost 30 years. He was also co-founder of the Patina Restaurant Group, which merged with Restaurant Associates in 1999, and which now operates about 60 restaurants around the country. Two of these, Nick & Stef’s in L.A. and New York City, named for Splichal’s sons, are steakhouses. Ten different steaks are available at the L.A. original (the New York menu varies slightly), including USDA prime dry-aged on the premises, Certified Black Angus, and American and Japanese wagyu. A couple of unusual add-ons are bacon confit and giant Madagascar shrimp. The Caesar salad is tossed tableside, and the sides include hand-cut russet fries with garlic and parsley, Szechuan long beans with pink peppercorns, and creamed spinach with bacon and a breadcrumb crust. 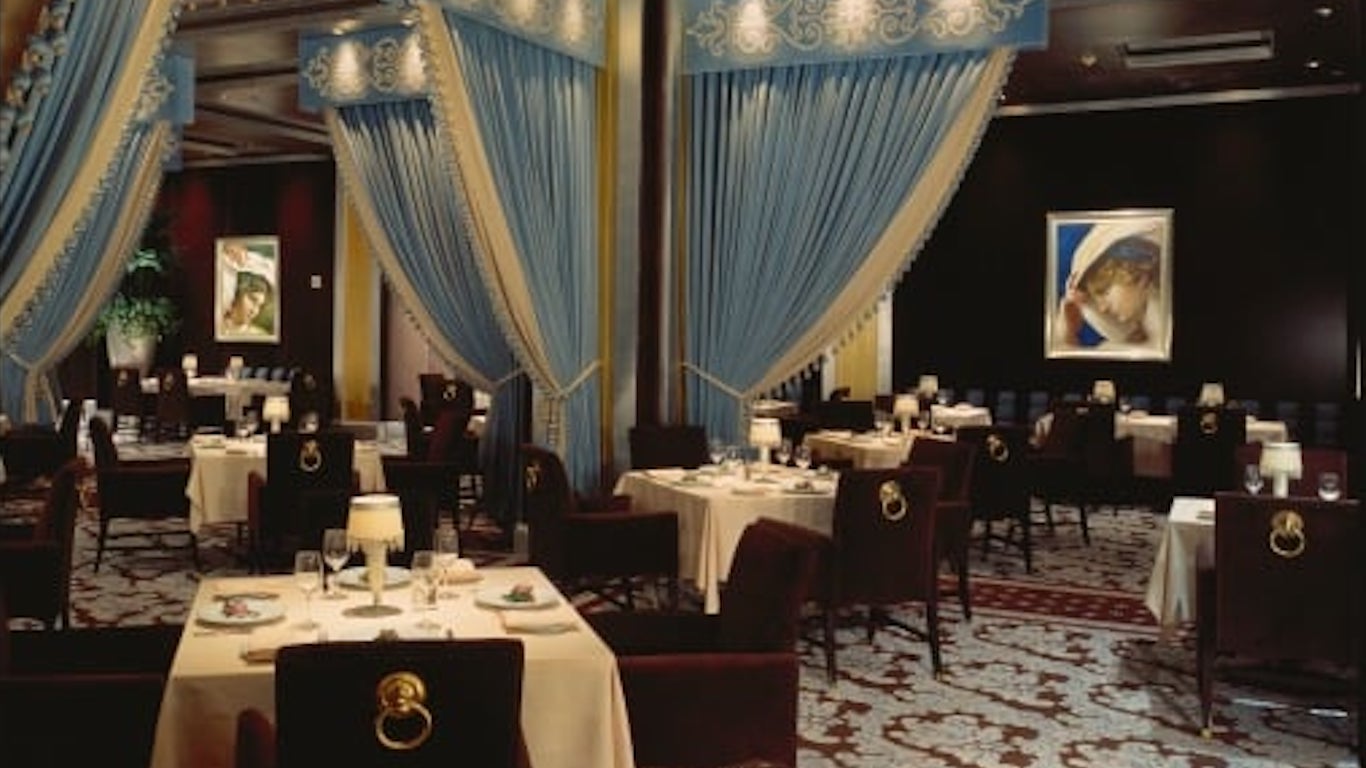 Source: Photo by Prime via Yelp

Jean-Georges Vongerichten has two Michelin stars at his Manhattan flagship, Jean-Georges. He runs almost 40 restaurants in all, in the U.S., the Caribbean, Mexico, Brazil, the United Arab Emirates, and several parts of Asia. At Prime, Vongerichten’s French training and penchant for Asian flavors come together nicely, with menu items like crispy salmon sushi with chipotle mayo and crispy rice, soy-garlic-glazed New York strip — plus eight other steaks, among them genuine certified Kobe from Japan — broccoli with jalapeños and cheddar, and one of the great French potato dishes, gratin dauphinois, luxuriating in melted Comté cheese. Vongerichten has a second Las Vegas steakhouse called simple Jean-Georges Steakhouse. 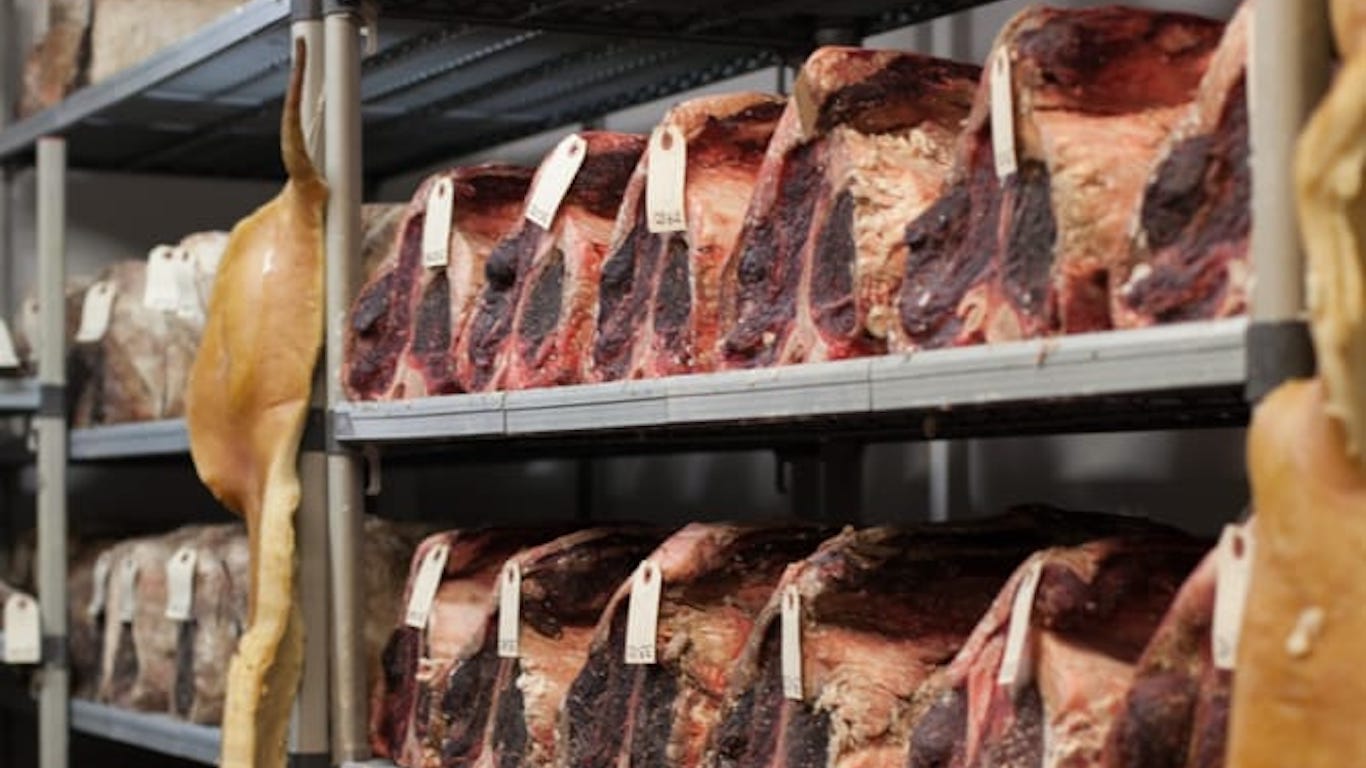 In addition to running BLT Prime at the Trump International Hotel in Washington, D.C., noted chef-restaurateur David Burke maintains this warmly furnished dining room at the Native American-owned Foxwoods Resort Casino. The menu focuses on an array of steaks dry-aged in the restaurant’s pink-salt room — the salt helps absorb moisture — some for as long as 75 or even 100 days. Appetizers range from a surf & turf tartare, which includes dry-aged filet, ahi tuna, wasabi, avocado, and pickled quail egg, to extra-thick-cut candied “clothesline” bacon. The seafood menu includes several preparations of Maine lobster, as well as the region’s famed Stonington scallops, served with sweet pea purée and more candied bacon. 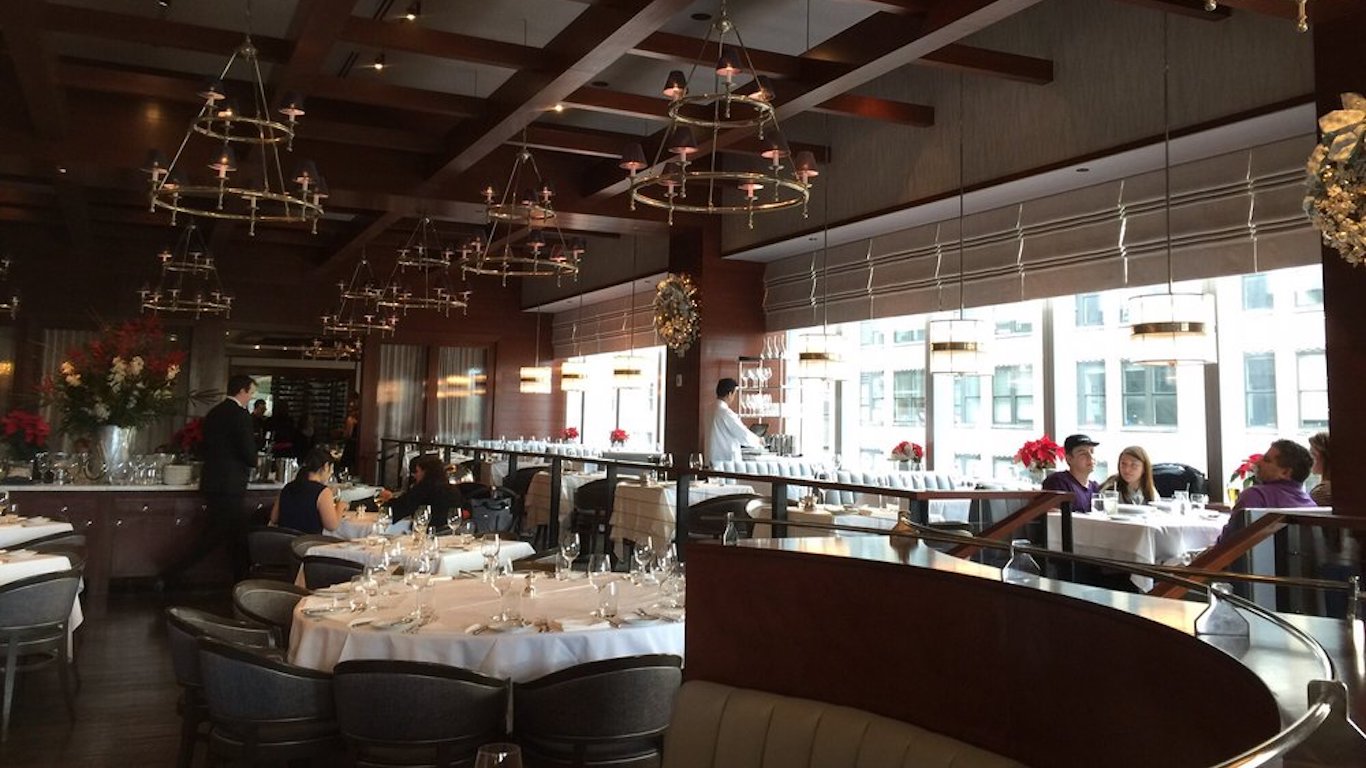 Michael Lomonaco ran the kitchens at Windows on the World in the World Trade Center when the towers went down on 9/11. He was picking up a pair of glasses at the time, and so survived the tragedy. A cooking teacher and television personality as well as a chef-restaurateur, he opened this attractive restaurant overlooking Central Park in the Time Warner Center in 2006. His appetizer menu includes roasted bone marrow with chanterelles, New York-cured thick-cut slab bacon, and a salad with bacon and blue cheese that substitutes tender butter lettuce for the usual iceberg. There are nine steaks, mostly dry-aged prime, including a chili-rubbed rib eye with roasted chiles and agave. Slow-roasted prime rib with bone marrow is a special on Wednesdays and Thursdays. Potatoes include black truffle mashed and crispy hash browns. 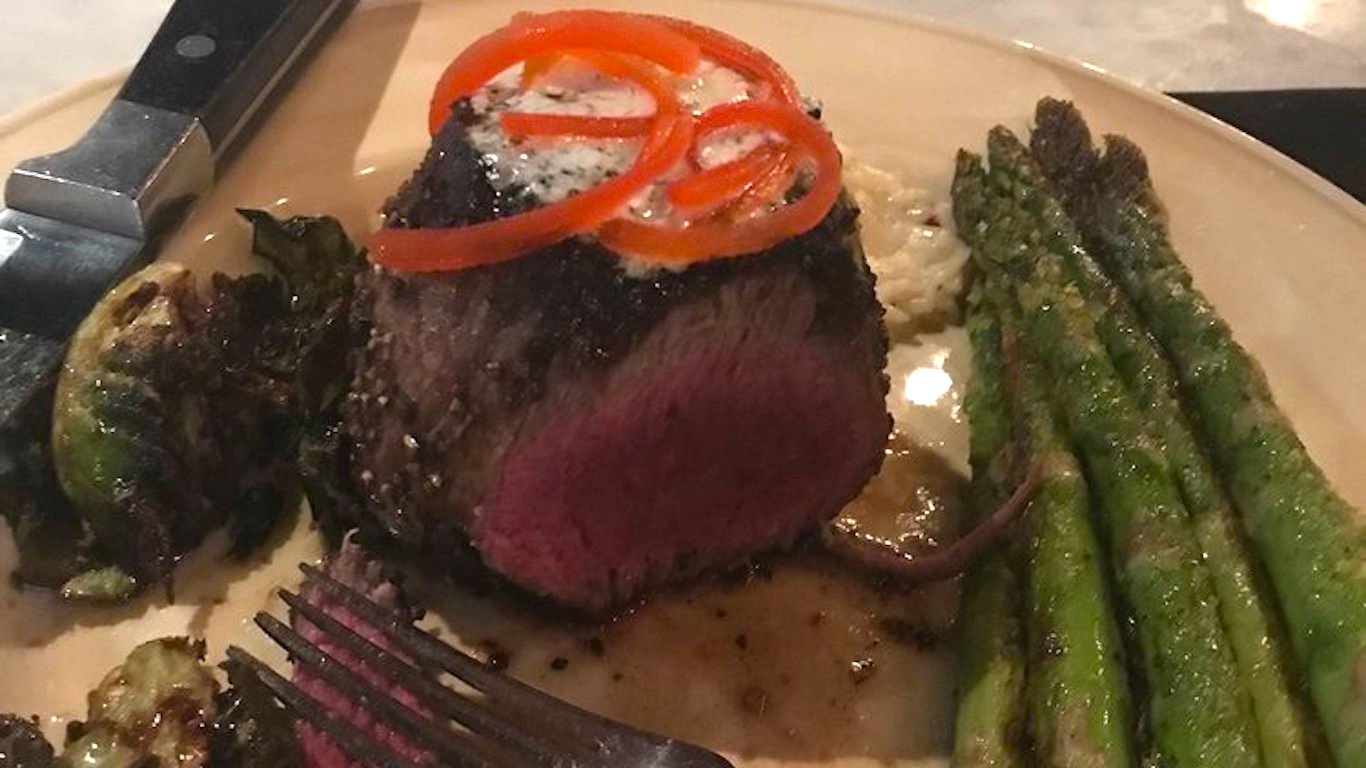 Best known for his Lonesome Dove Western Bistros in Fort Worth, Austin, and Knoxville, Tennessee, Tim Love named this Texas-flavored steakhouse in Denton, the outer Fort Worth suburb where he was born, after his mother. You know you’re in the Lone Star State when you look at the menu: wild boar ribs with Lonesome Dove bbq sauce, Texas red chili, chicken-fried quail legs, and more. There are only four steaks on the menu, but these include a buffalo ribeye and a 32-ounce wagyu tomahawk with truffled mushroom orzo and grilled langoustines. And here’s something no other steakhouse offers: On Friday and Saturday nights, from 11 p.m. to 1 a.m., fresh-made doughnuts are sold out the back door.