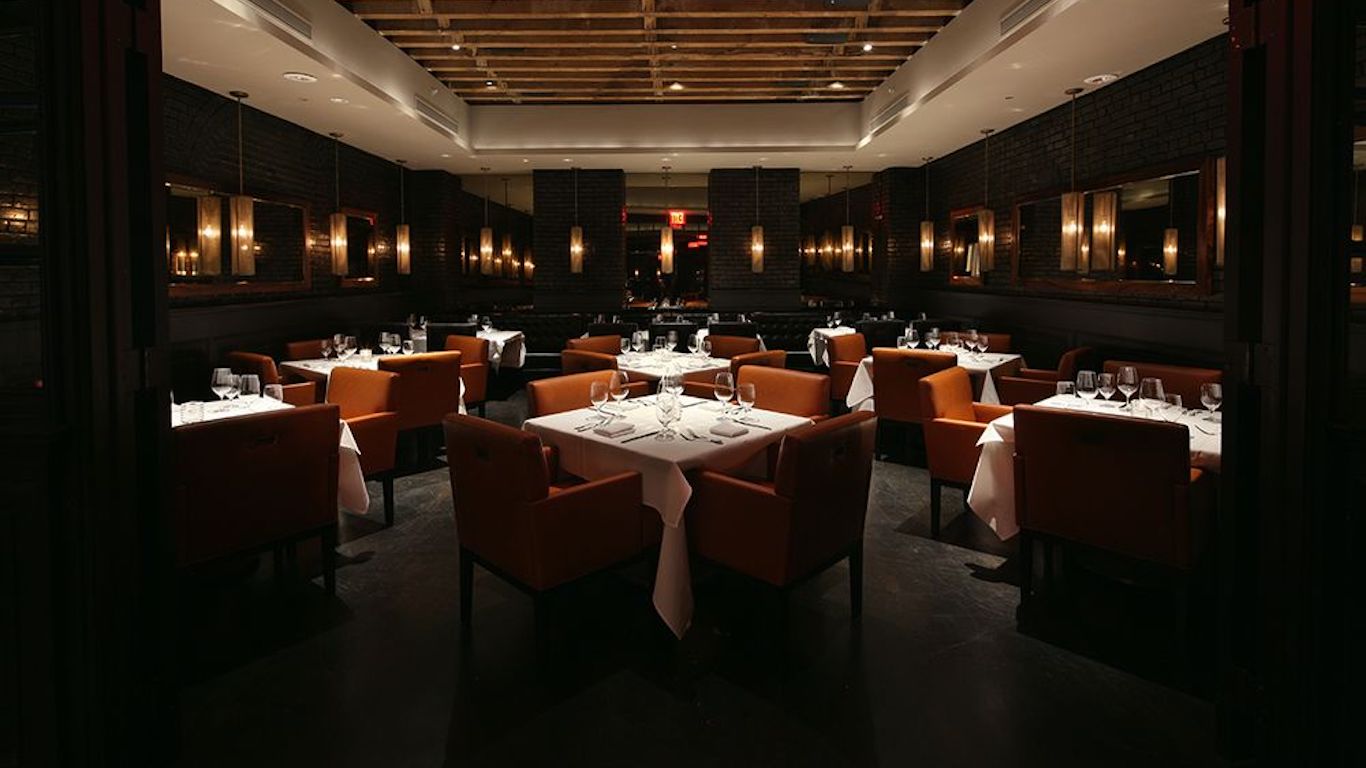 Son of “new American” pioneer Larry Forgione, Marc was the youngest American-born chef to win a Michelin star (for his Restaurant Marc Forgione). He has competed on “Iron Chef America” and “The Next Iron Chef.” His American Cut steakhouses — there are two locations in New York City and one in Atlanta — don’t stray too far from tradition, but they offer some interesting twists. There’s a “hot and cold seafood tasting,” for instance, that includes Diamond Jim Brady oysters gratineed with champagne, black truffles, and cheese, as well as raw ones, chili lobster, littleneck clams, shrimp cocktail, crab cocktail, poached lobster, and tuna tartare. Steaks include both wet- and dry-aged offerings, including a 30-day-dry-aged pastrami-cured ribeye and a porterhouse or tomahawk chop for two, flambéed tableside. There is also wagyu beef from both Oregon and Japan, plus a Glatt Kosher Delmonico ribeye. Potato choices include Joël Robuchon’s notorious purée, which is approximately half butter. 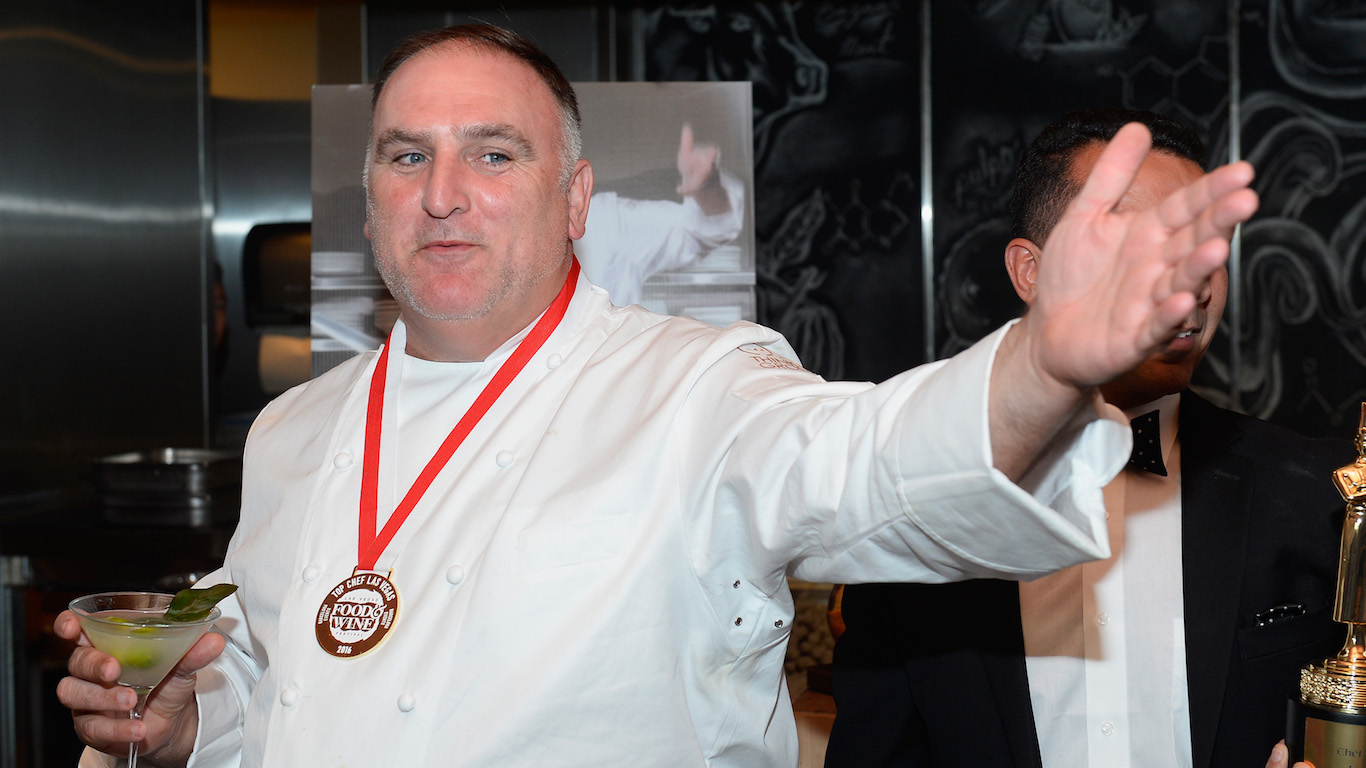 There’s no stopping Spanish-born José Andrés. In addition to being the proprietor of more than 25 restaurants in five states plus Washington D.C., Puerto Rico, and Mexico City, he is also a anti-hunger and immigration activist and the leader of grass-roots disaster recovery efforts in Puerto Rico, California, Hawaii, and elsewhere. His knowledge of Spanish food both avant-garde and traditional is encyclopedic, and his imagination seems to know no bounds, so it’s hardly surprising that his steakhouse menu is by far the largest and most unusual of any chef’s. Nine kinds of caviar, foie gras in a cloud of cotton candy, raw thin-sliced bison “Buffalo style” with pickled celery, blue cheese, and Buffalo wing sauce, a giant pork rind with Greek yogurt, braised lamb neck with fried oysters, blood sausage with sea urchin, whole roast suckling pig — by advance order, at $540 per animal … Oh, and a dozen different steaks from around America and Japan, cooked in a specially constructed fire pit. 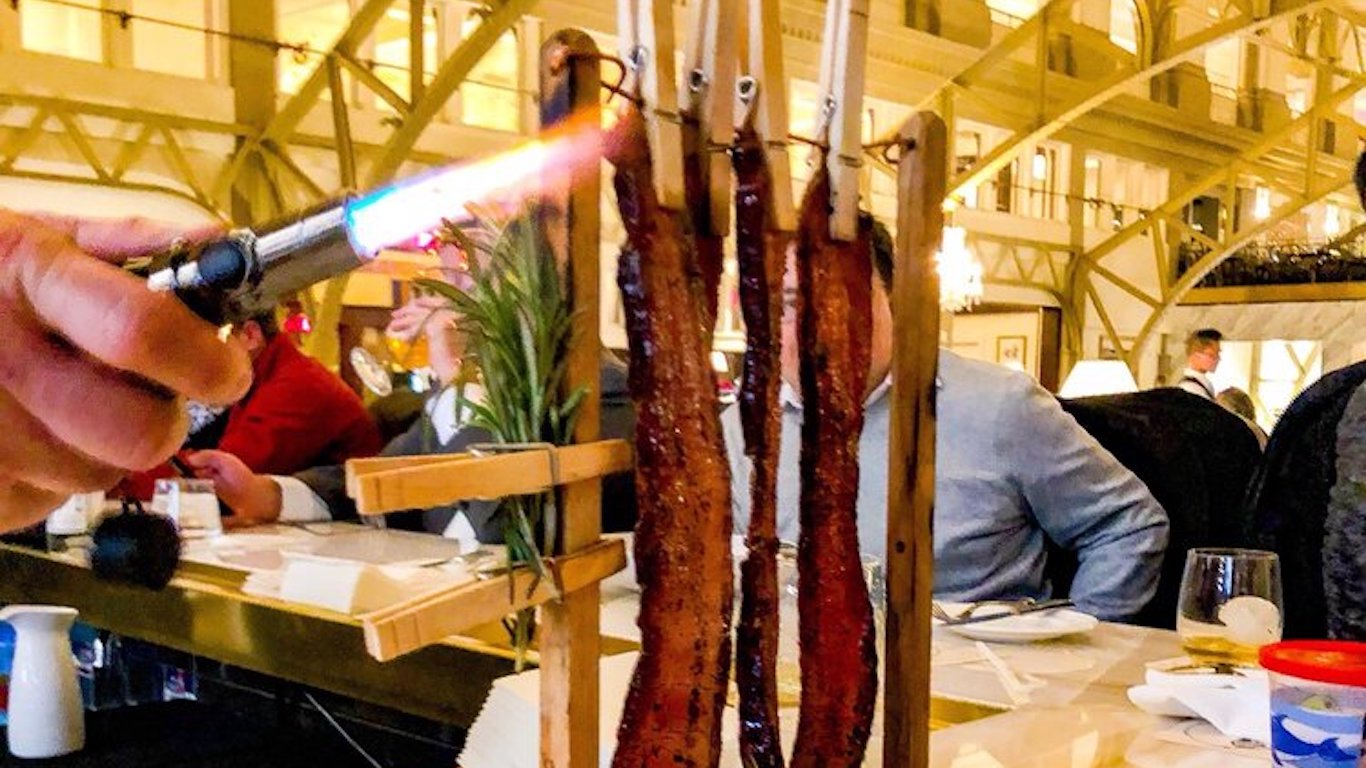 “Iron Chef” star and prolific restaurateur David Burke stepped into this restaurant space in the Trump International Hotel after José Andrés pulled out to protest then-candidate Trump’s remarks about Mexican immigrants. The dining room is spectacular, overlooking a bright atrium lobby spanned by Eiffel-Tower-like girders, and Burke’s menu is appropriately over-the-top. Russian (!) imperial ossetra caviar goes for $250 an ounce here, the Caesar comes with crab cake croutons, and the 10 assorted steaks include A5 Miyazaki Kobe beef at $65 an ounce — and you can add an ounce of black truffles for $165. There are other BLT Primes in Miami and New York City, but while Burke is a partner in the company that runs them, he is not directly involved. 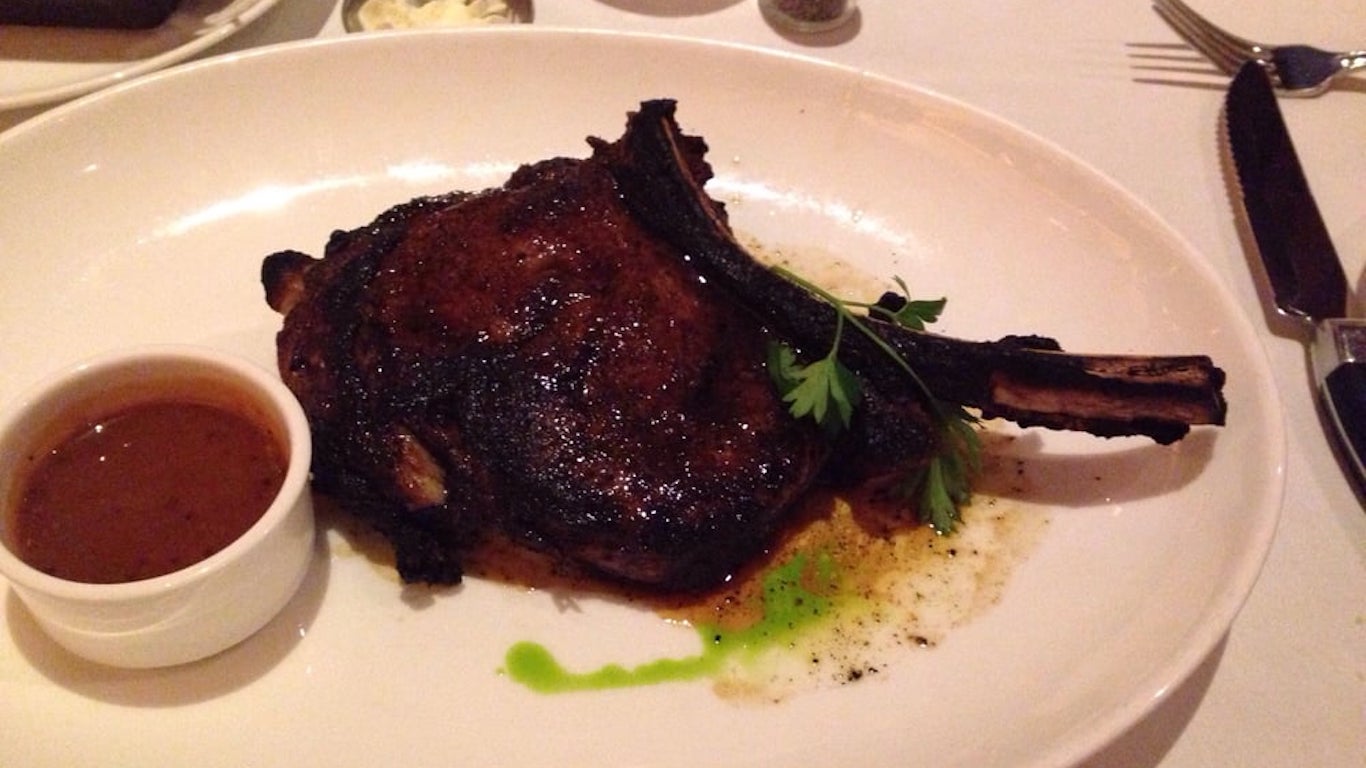 This colorful dining room in the Borgata Hotel & Casino “honors the traditions of classic steakhouse fare, incorporates New Jersey’s fresh produce, and pays tribute to its neighbor, the City of Brotherly Love,” according to its website. That translates to such menu items as gorgonzola ricotta fonduta with grilled toast, lobster and crispy squid salad with sweet peppers and chiles, pan-seared halibut with white clam sauce, Philadelphia-style strip steak with provolone cheese sauce and caramelized onions, and five steaks, spice-rubbed, with Bobby Flay Steak Sauce. 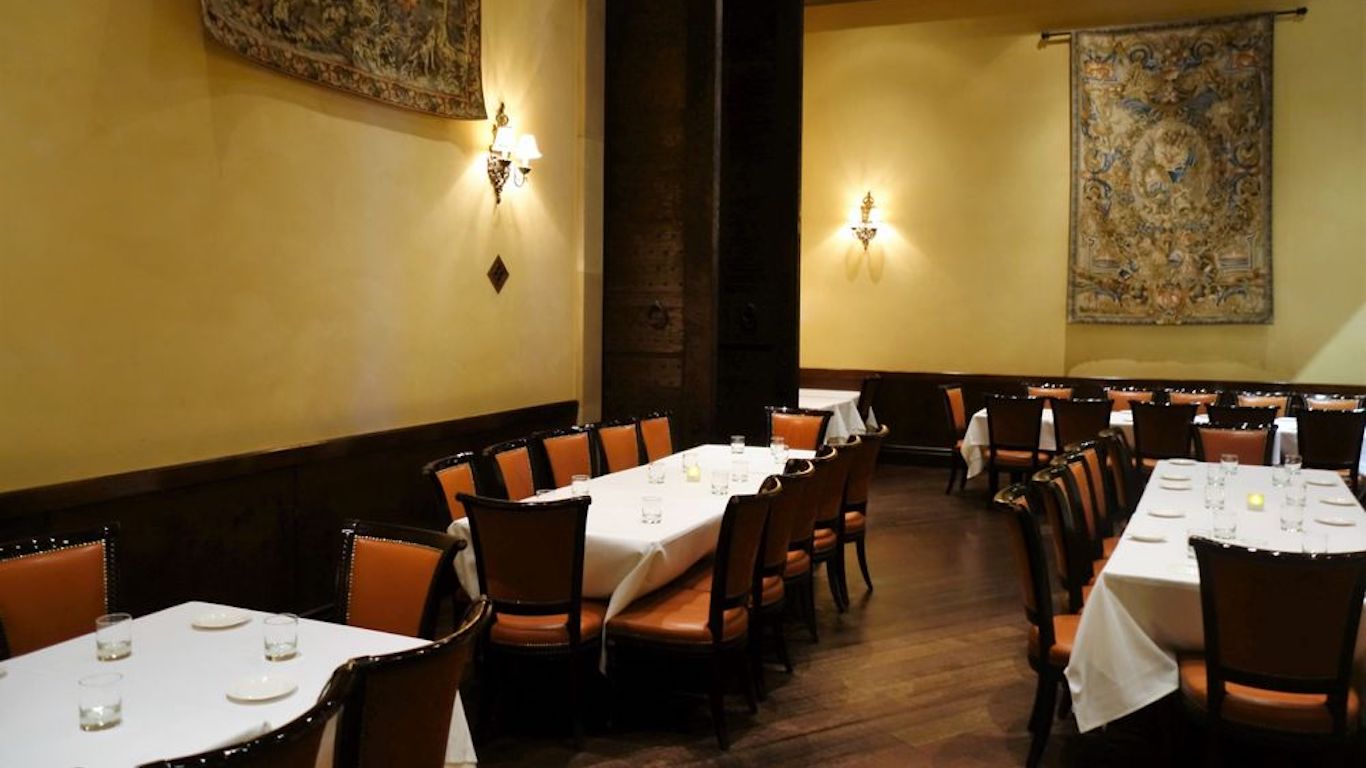 The proprietor of this Italian-accented steakhouse, Joe Bastianich, isn’t exactly a celebrity chef. He’s a celebrity restaurateur, son of chef-restaurateur and television personality Lidia Bastianich, and until earlier this year a partner in a number of restaurants, including this one, with a genuine celebrity chef, albeit now a tarnished one, Mario Batali. There are five USDA prime steaks rubbed with sea salt and fresh rosemary on the menu, as well as a classic Florentine-style porterhouse. Other Italian references include top-quality prosciutto di Parma, fried calamari with marinara sauce and pickled hot peppers, 14 pasta dishes ranging from classic tagliatelle bolognese to non-classic stinging nettle gnocchi with morels and favas, and such side dishes as mascarpone and guanciale mashed potatoes and grilled asparagus with tomato-olive tapenade.