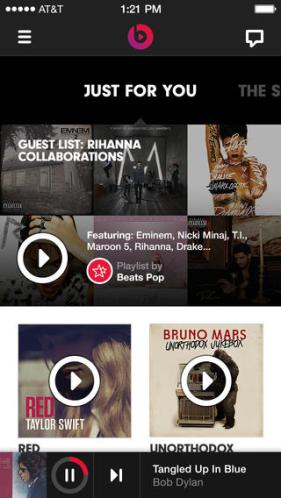 Source: Apple Inc.
Of the $15 billion in 2013 global sales of recorded music, nearly 40% came from digital sources such as ad-supported and subscription streaming or paid digital downloads. That may sound good, but revenues were down about $1.5 billion from 2012. The worse news is that sales of albums and individual tracks are falling still further in 2014, last week hitting a new record low of just 3.97 million sales.

By the end of this year, Apple Inc.’s (NASDAQ: AAPL) iTunes store will generate less than half of the company’s online services revenue, according to an April report from Morgan Stanley. The App Store is expected to generate 53% of Apple’s online services revenue in the fourth calendar quarter and 56% in the first quarter of 2015. iTunes’ share falls to 47% and 44%, respectively, and there’s little chance that iTunes will get its mojo back.

The Morgan Stanley research indicates the iTunes customers are spending less on purchasing and the firm figures the dollars are going to pay for streaming subscription services like Pandora Media Inc. (NYSE: P), Spotify and even Netflix Inc. (NASDAQ: NFLX).

When Apple paid $3.2 billion for Beats Electronics, the tech giant was not buying a maker of earphones. What Apple was paying for was the brand as exemplified by co-founders Dr. Dre and Jimmy Iovine, one a well-known artist and the other a music business icon.

Billboard sums it up this way, “Streaming is cannibalizing digital sales.” So Apple could sit around and watch its iTunes revenues evaporate or it could try to get on a train that has already left the station. That led to the acquisition of Beats.

If sales of recorded music is at a recent low and falling fast, the streaming companies have their own problems. Ad-supported free streaming companies like Pandora and Google Inc.’s (NASDAQ: GOOG) YouTube generate only 10% of the revenue that subscription services like Spotify and Beats do. That’s why Google is pushing its channel business and why Apple is spending money on Beats. Being in the music business is going to get a lot tougher before it gets easier.

Why One Analyst Sees Over 40% Upside in This Bitcoin Play