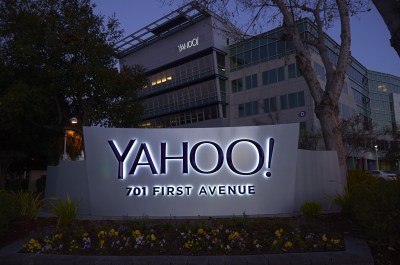 Source: Yahoo! Inc.
With Apple blowing the doors off its numbers, and sales of the iPhone 6 models skyrocketing, some of the luster that drained out of tech on the Microsoft miss may start to return to the market. While most on Wall Street remain positive on technology for 2015, the huge Apple numbers reinforced those beliefs. In a new research note from Jefferies, five top tech companies are standouts in the firm’s coverage universe.

The Jefferies team stays very positive on the large cap stocks, some of which have already reported fourth-quarter numbers. With 2015 most likely a more volatile year, tech could move around more, but the major players are poised for growth.

Amazon.com Inc. (NASDAQ: AMZN) kicks off the list and could be primed to surprise investors. After a woeful 2014, with the stock is now down over 25% from highs printed a year ago, a strong holiday selling season could help earnings blow past consensus. Investors discontent with CEO and founder Jeff Bezos added to the Internet retail giant’s woes. Amazon will report Thursday, and the Jefferies team is ahead of estimates and think margins should come in stronger. Lower fuel costs are also expected to help the online retail giant.

The Jefferies price target on the stock is $380. The Thomson/First Call consensus price target is $358, much higher than the Wednesday close at $303.91.

Google Inc. (NASDAQ: GOOG) is another mega cap tech name that is a Franchise Pick for 2015 at Jefferies. The stock is trading at levels that may offer long-term investors a very solid entry point. The company posted underwhelming earnings for the third quarter that may have caught many off guard, and with fourth quarter scheduled to be reported Thursday, some volatility has crept back into the stock. The Jefferies analysts are slightly ahead of street estimates, and they are very positive for the company to report strength in search, YouTube, Google Play and other silos.

The Jefferies price target for the search colossus is a whopping $700. The consensus target is at $633.88, and the stock closed Wednesday at $510.

Intel Corp. (NASDAQ: INTC) is another Franchise Pick at Jefferies, and introduced the company’s fifth generation processor at this year’s CES. Intel’s commitment to smartphone and mobile applications, combined with the resurgence of PC growth last year, made it one of the best large cap value stocks to buy in 2014, and the same outlook could drive the stock this year. Intel trades at just over 14 times 2015 earnings estimates, more than in recent years, but still a very reasonable multiple for investors looking for growth. The company reported solid numbers, but was weak on the bad Microsoft print. The Jefferies team noted that shipments have decoupled from Microsoft, with Intel selling to Chrome PCs, Macs and Android, none of which use Microsoft operating systems.

VMware Inc. (NYSE: VMW) has been on fire and is a leader in cloud storage software. Its cloud computing service is a new offering for its customers. The company’s vCloud Hybrid Service has not been designed or marketed as a standalone public cloud as of yet. Many analysts believe that on a pricing basis it is one of the more expensive offerings. The ability to tie its software solutions in with public cloud service may be a huge winner in the future. The fourth-quarter numbers beat expectations, but guidance was lower than estimates on currency headwinds.

The Jefferies price target drops to $104 from $128, but it remains the top large cap pick for 2015. The consensus target is $99.44. VMware closed down big on Wednesday at $75.06. Investors can also indirectly own VMware by buying the stock of storage giant EMC, which owns over 43 million shares of the stock.

Yahoo! Inc. (NASDAQ: YHOO) reported so-so numbers for the quarter, but the stock got a boost when it announced a tax-free spin-off of the company’s gigantic Alibaba stake, much of which has been lost on the weaker-than-expected Alibaba numbers. While the market applauded the spin-off, the lackluster numbers and weak guidance once again put the spotlight on CEO Marissa Mayer to generate real growth at the company. With that growth centered on search, communications, digital magazines and video, investors will be closely watching earnings and revenue for the rest of 2015. Activist shareholders are still pushing the company for change.

The Jefferies price target is $61, and the consensus target is $51.36. The shares closed Wednesday at $46.46, but traded down big early Thursday.

ALSO READ: Is Weaker Alibaba Growth a Sign of More Bad Things Ahead?

The Jefferies game plan is pretty clear for 2015. Stick with the large cap stocks with liquidity and growth prospects. While volatility should be higher this year, the possibility of solid gains is in place as well.