Why Texas Instruments Is a Top Merrill Lynch Pick for Q2

Texas Instruments Inc. (NASDAQ: TXN) has done well, along with the broader market and semiconductor stock rally. With a gain of 11% so far in 2017, its performance is quite similar to that of the Van Eck Semiconductors index ETF and the Nasdaq 100. Still, that is twice the gain of the S&P 500.

Bank of America Merrill Lynch’s global research team has this week published a list of the firm’s Top 10 U.S. Ideas Quarterly for the second quarter of 2017. The firm has eight Buy ratings and two Underperform ratings across five sectors, and the charts of these stocks were used to identify the absolute and relative price trends as well as potential technical catalysts for the Top 10 U.S. Ideas.

As far as why Texas Instruments’ chart is favoring a price up in the $90s, the technical report said:

It is important to recall that technical analysis and chart watchers often differ greatly from the formal Buy, Sell or Neutral ratings and the underlying fundamental price targets of a firm. In this case, that is not the case as Merrill Lynch’s fundamental team has a Buy rating and a $92 price target.

Included below is a chart showing the long-term upswing that led the Merrill Lynch team to make its call for the stock to rise into the $90s. 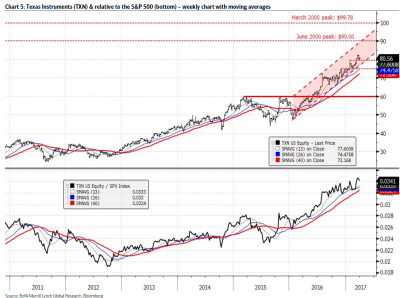