Gores Metropoulos Inc. (NASDAQ: LAZR) and Luminar Technologies on Friday completed a reverse merger announced in August. Luminar, a maker of lidar (light detection and ranging, or laser-light) systems for autonomous cars and trucks, received approximately $590 million in cash upon the completion of the transaction, with $460 million coming from Gores and $184 million from financing provided by several institutional investors. The company has changed its name to Luminar Technologies, although the name change isn’t reflected yet.

Until Friday, Gores had been a special purpose acquisition company (SPAC). Shares of Gores closed at around $23 on Thursday and jumped more than 35% on Friday to close at $31.40. Shares traded up about 8% early Monday at $33.83.

In early October, Velodyne Lidar Inc. (NASDAQ: VLDR), another tech firm that makes lidar sensors for autonomous vehicles and drones, came public courtesy of Graf Industrial, a SPAC (or blank-check company) formed in April. The stock opened at around $25 and sank nearly 25% to close its first trading day at $18.69. Velodyne stock closed at $15.12 on Friday but traded up around 4.5% on Monday morning at $15.89.

Lidar is widely seen as a key to fully self-driving vehicles. Volvo, one of the investors in Luminar, expects to have the company’s Iris autonomous system designed into its cars in 2022. Luminar claims that its system is “the only lidar sensor” that meets performance requirements for Level 3 to Level 5 autonomous driving.

Current self-driving systems are limited to Level 2 automation. As the following chart from the Society of Automotive Engineers chart indicates, at Level 2, the driver is driving the vehicle and must constantly supervise the support features, like lane-keeping and adaptive cruise control. At Level 3 and above, the driver is not driving the car when certain self-driving features are engaged. 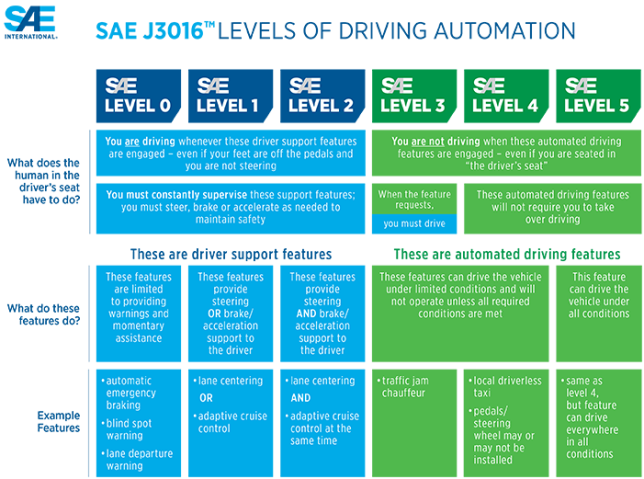 Not long ago, a lidar system cost around $75,000. Last year, Waymo, the self-driving unit of Alphabet Inc. (NASDAQ: GOOGL), was selling its lidar system for $7,500. Luminar expects to drive the cost below $1,000 in the next few years, according to Ars Technica.

One company that did not bet on lidar was Tesla Inc. (NASDAQ: TSLA). Tesla CEO Elon Musk balked at the high price of the systems, and the company chose instead to develop its own camera-based system. It remains to be seen if Musk and Tesla made the right choice.