What's Up With Apple: Podcasts Spotlight, Apple TV+ and More

Tech stocks had a solid Inauguration Day, adding just over 2% across the entire sector. Apple Inc. (NASDAQ: AAPL) posted an even better gain, up about 3.3%. Most of the other tech biggies did as well or better: Alphabet posted a gain of 5.4%, Amazon added 4.6%, Microsoft jumped 3.7% and Facebook rose 2.4%. Investors appear to believe that a new occupant in the White House will be good for equity markets and particularly good for tech stocks.

Apple on Wednesday launched a new service the company calls Podcasts Spotlight. The idea behind the new service is to shine a light on singularly talented podcast creators who are still developing an audience. Chelsea Devantez of the Celebrity Book Club podcast kicked off the Spotlight. Apple’s Ben Cave, head of the company’s Apple Podcasts business, commented:

Chelsea Devantez has created a fun, vibrant space with Celebrity Book Club for listeners to gain new perspectives on the celebrities we thought we knew. We are delighted to recognize Chelsea and Celebrity Book Club as our first Spotlight selection and look forward to introducing creators like Chelsea to listeners each month.

Apple is trying to carve out a place for itself in the booming demand for podcasts. Analysts Gene Munster and David Stokman of Loup ventures recently wrote a blog post on the future of podcasts, noting that more than a third (37%) of Americans who are at least 12 years old listen to a podcast monthly and nearly a quarter (24%) listen weekly. Podcast revenues are small, about 1.5% of all TV advertising and less than 5% of radio advertising. The analysts conclude: “While bets from major tech companies do not guarantee success, they are strong indications that podcasting will continue to grow its share of total audio consumption.”

Earlier this month, Apple’s Taiwan-based iPhone manufacturing firm, Foxconn, announced that it would begin building electric vehicles (EVs) for Chinese EV maker Byton. Could this have been a sign that Apple would use Foxconn to build its own EV? Last week, word got out that South Korea’s Hyundai Motors was discussing building Apple Cars at Kia’s U.S. plant in Georgia.

CNBC has an interesting story on the different approaches of Apple and Foxconn to entering the automaking business. Each will play to its particular strengths. Foxconn hopes to manufacture a ubiquitous low-cost platform for EVs while Apple sees an opportunity to extend its massive brand power into a new field. CNBC cites CFRA analyst Angelo Zino: “Apple would never get into it if it weren’t both an electric vehicle and an autonomous vehicle. Transportation will go through massive disruption.”

A new survey by streaming video app provider JustWatch reveals that Apple TV+ had a market share of just 3% in the fourth quarter of last year. The following graphic from JustWatch was included in a report at 9to5Mac. Apple TV+ trails even recently launched Peacock. The issue could be that the Apple subscription service “has only original movies and shows, the catalog is remarkably small compared to its competitors.” 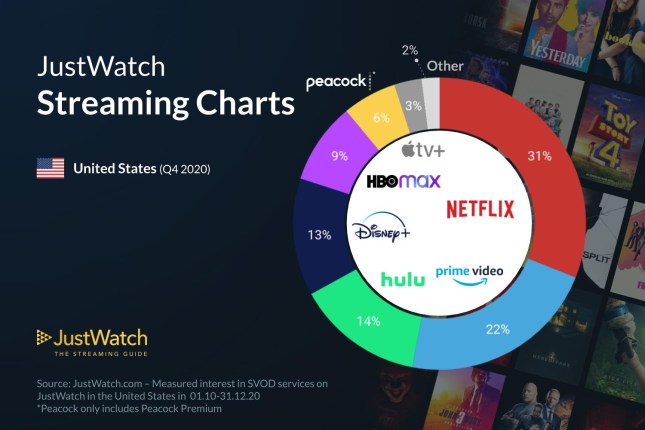 Finally, a report from South Korea indicates that LG Electronics may be getting out of the smartphone business. According to MacRumors, “LG has seen rapidly declining smartphone shipments in recent years, and the company is now believed to hold a market share of just two percent. LG has posted major financial shortfalls in its smartphone segment for 23 consecutive quarters, reaching a total loss of $4.5 billion.” The electronics giant also is reported to be ending its production of LCD displays for Apple’s iPhone.