What's Up With Apple: iPad Pro Delay, US Senate Hearing and More

An anticipated launch of new high-end iPads rumored to happen later this month may be delayed by Apple Inc. (NASDAQ: AAPL), whose suppliers are having difficulty maintaining yields for the new miniLED display screens. The new screen technology is being prepped for the top-of-the-line, 12.9-inch iPad Pro.

MiniLED technology allows display makers to stuff even more pixels on a device’s backlighting assembly. The visual effect is brighter bright colors, darker darks and less haloing. The technology is said to be nearly as good as OLED but somewhat cheaper and with a longer life. An even denser display technology, microLED, is also under development.

According to a report from Bloomberg, key suppliers of miniLED technology to Apple are three Taiwan-based firms: Ennostar, General Interface Solution and Taiwan Surface Mounting Technology.

Apple managed to get sideways with the U.S. Senate Judiciary Committee’s Subcommittee on Competition Policy, Antitrust and Consumer Rights, which is holding a hearing on April 21 related to competition and royalty payments from app stores such as Apple’s App Store and Google Play.

In a letter to Apple CEO Tim Cook dated April 9, Senators Amy Klobuchar and Mike Lee called it “unacceptable” that Apple refused to send a witness to testify at the hearing, “when the company is clearly willing to discuss [competition issues] in other public forums.”

Cook got the message, according to Bloomberg News, which claimed to have seen a copy of Apple’s response issued Sunday. The company said it was “surprised” at the Senators’ response and said it was all a big misunderstanding:

We have deep respect for your role and process on these matters and, as we told your staff, we are willing to participate in a hearing in the subcommittee. We simply sought alternative dates in light of upcoming matters that have been scheduled for some time and that touch on similar issues.

It’s all sorted out now, however, and Apple’s chief compliance officer, Keith Andeer, has made room on his schedule to appear at the subcommittee hearing on April 21.

Anti-competitive charges against Apple and other big tech firms like Google are a hot topic these days. Apple and Epic Games, makers of Fortnite, last week filed documents in a lawsuit charging Apple with anti-competitive behavior for requiring that all apps available from the App Store use only Apple’s in-app payment system. Apple also charges a royalty of 30% for total third-party sales of more than $1 million. Below that level, the royalty rate is 10%.

Finally, AppleInsider last week, noted a report from data analytics company Mixpanel, indicating that more than 90% of iPhone users have upgraded their phones to iOS 14. According to a report from Android Authority, cited by AppleInsider, Android 11, released a week earlier than iOS 14 last September, has been installed on just over 20% of Android phones in the United States as of last month. Apple has not confirmed the Mixpanel data, which is based on some 3.7 trillion records accumulated from website access and app usage when the operating system version is reported. 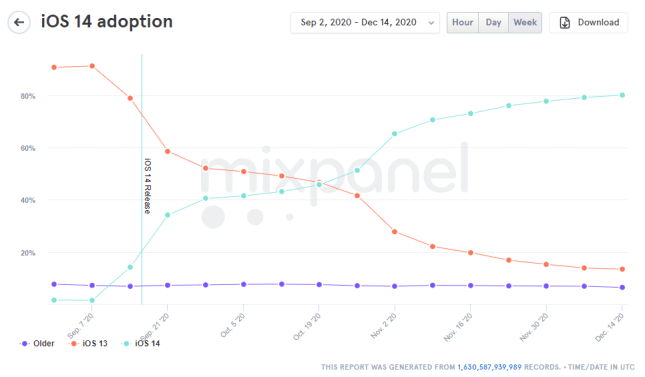 Why Analysts Are Battering Array Technologies

Short Sellers Have Had Enough of Betting Against Apple, Microsoft