According to a Comscore study commissioned by Facebook and shared with The Verge, 15 of the 20 most-used apps on the iPhone are made by Apple, and 13 of the top 20 Android apps are made by Google.

The Comscore study, according to The Verge, “is the first real attempt at charting how default mobile apps compete against other developers.” The results are shown in the following chart. 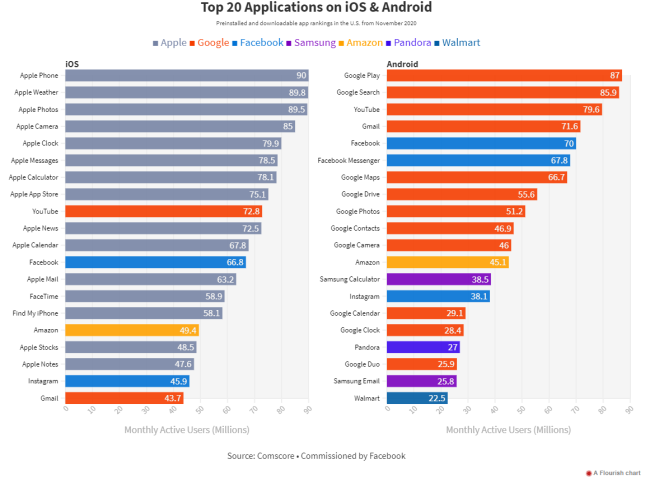 Facebook is the only third-party app developer with more than one app on both lists. Company spokesperson Joe Osborne said that Facebook paid for the study in order to show the “impact of preinstalled apps on the competitive app ecosystem.”

Apple, especially, has come under fire recently for its tight grip on its ecosystem. The company was sued by Epic Games for its refusal to allow third-party payments, and streaming music provider Spotify has complained to the European Commission about antitrust violations.

This Facebook-financed survey from December 2020 was narrowly tailored to give the false impression that there’s little competition on the App Store. In truth, third-party apps compete with Apple’s apps across every category and enjoy large scale success.

Wednesday was also a good day for Google stock, which posted a new all-time high of $2,545.68, although the company’s Google Play Store was hit with an anti-competitive lawsuit filed by 36 state attorneys general and the District of Columbia.

All five traded down more than 1% in Thursday’s premarket session.

What's Up With Apple: iPhone Release Date, 11 Reasons and More

What's Up With Apple: China Flooding, iOS 14.7 Release and More