Since Apple Inc. (NASDAQ: AAPL) announced its new iPhone 13 and iOS 15 operating system a month ago, the company has now released two bug-fix updates to iOS 15. The first came two weeks after the new iOS release and fixed a ton of irritating bugs.

The second was released Monday and it, too, fixed some continuing problems with photo storage, AirTag communication and others. iOS 15.0.2 also fixed a security issue that may have allowed an attacker to “execute arbitrary code” by gaining access to the highest level of the operating system’s privileges.

Apple also noted that the security bug may have been actively exploited. For iPhone owners, that means updating their phones with the iOS 15.0.2 update package as soon as possible.

According to TechCrunch, Apple is currently testing a major update to iOS 15 (iOS 15.1) that will include new camera features for iPhone 13 Pro and Pro Max, the ability to store a COVID-19 vaccination record in Apple Wallet, and re-enabled SharePlay in FaceTime. There are likely to be more bug fixes as well.

The Wall Street Journal had an interesting piece Tuesday morning about competition in the 5G markets, including communications equipment makers like Huawei, Nokia and Cisco; phone makers like Apple, Samsung and Google; and, perhaps most interesting, the competition among countries for gaining control of the protocols and specifications for 5G (and beyond) networking.

Equipment makers Ericsson, Samsung and Cisco have recovered a bit this year after market leader Huawei’s fall from grace. Huawei still nabs nearly 30% of the global market for hardware, followed by Nokia and Ericsson in a virtual tie for second at around 15% each.

Among smartphone makers, Apple overcame a one-year head start by Samsung and had 28.3% of the global market for 5G phones in the first six months of this year. Samsung had 13.9% of the market, trailing second-ranked Oppo with a 14.4% share.

We noted on Monday that Apple is believed to be pushing its CarPlay infotainment system as a more robust interface to the vehicle’s systems. The Apple followers at 9to5Mac have dummied up some CarPlay concepts showing how the system might look and what it might do if Apple can persuade automakers to adopt it. Here’s one look for the new, improved CarPlay Home Screen. That last point is not a slam dunk. 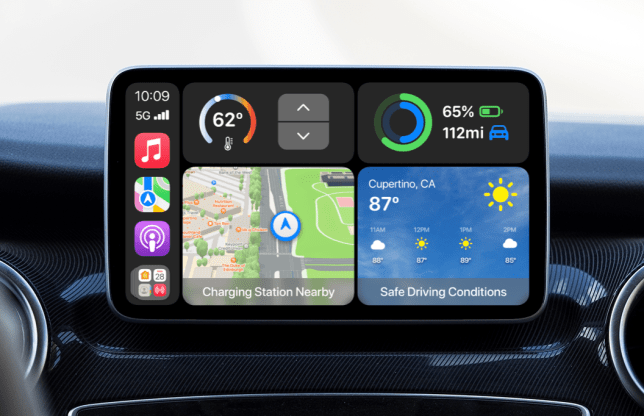 There are more illustrations and navigation ideas at the website.

What's Up With Apple: Twitter Prevails, From Russia Without Love, and More