Now that the Apple Inc. (NASDAQ: AAPL) iPhone 12 models have been on the market for a while, it’s time to get a reading on how the devices perform in the real world. How does the iPhone 12 compare to competing devices from Samsung, Google and others?

Mobile network experience research firm Opensignal presented on Monday its first report on how the iPhone 12 stacks up. The firm collects billions of measurements daily from more than 100 million devices that are being used for normal mobile communications activities. Opensignal measures actual end-to-end performance, from a content delivery network to a personal device.

According to Opensignal data, iPhone 12 users saw the biggest gains in network speeds among all smartphone brands. Yet, the fastest speeds were experienced by users of Samsung devices. 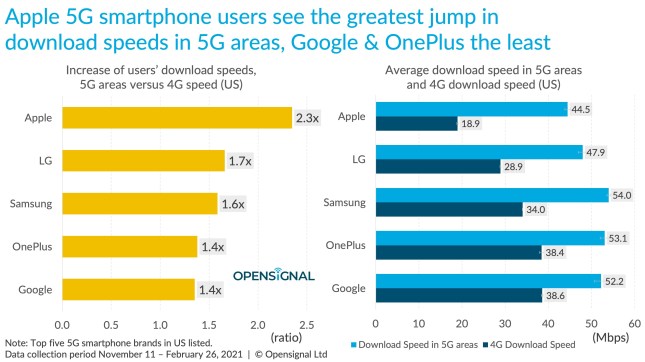 The following chart shows download speeds for every iPhone from the iPhone 5s through the 12 Pro Max. 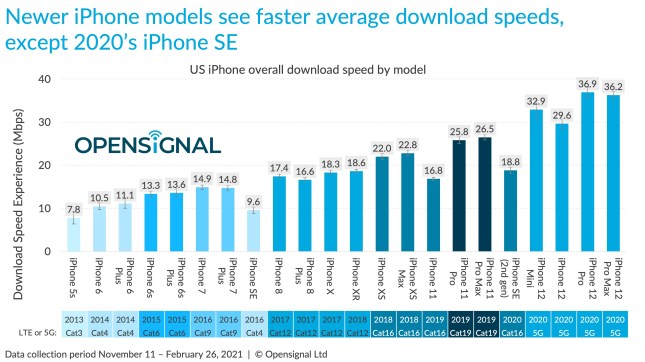 Opensignal expects a similar performance boost for the iPad Pro when that device is next upgraded. Users should see speeds “at least as fast as iPhone 12 users,” according to the firm.

Code sleuths at 9to5Mac on Monday reported finding code in the pre-release version of iOS 14.5 that suggests “a major policy shift that would allow users to download security patches separately from operating system updates.”

Speaking of iOS 14.5, MacRumors reported Monday that Apple has shipped the fourth beta version of the new operating system to developers. These are the versions of the iPhone and iPad operating systems that support unlocking a device even if you’re wearing a mask and the transparency tracking feature that has gotten up in Facebook’s nose. MacRumors has a full rundown of what to expect in iOS 14.5.