What's Up With Apple: States to Pay for iPhone Cards, Rocky Mountain High, and More

When Apple Inc. (NASDAQ: AAPL) recently announced iOS 15.1, the company added the capability to add a COVID-19 vaccination record to Apple Wallet. There are a couple of ways to get the vax data on the phone and one is to download a verifiable health record and add it to the Wallet.

Back in June, Apple said iPhone users would soon be able to store state-issued ID cards in Apple Wallet. In early September, the company announced that Arizona and Georgia will be the first of eight states to roll out the capability for residents to add their driver’s licenses to their Apple Wallet. The other six are Connecticut, Iowa, Kentucky, Maryland, Oklahoma and Utah.

Sounds simple enough, and it is. But it’s not free, and neither Apple nor iPhone users are going to pay for it. The state’s taxpayers are going to pay, according to a report from CNBC. The network reported Sunday that it had obtained confidential documents that spelled out the way this will work:

The company requires states to maintain the systems needed to issue and service credentials, hire project managers to respond to Apple inquiries, prominently market the new feature and push for its adoption with other government agencies, all at taxpayer expense, according to contracts signed by four states.

CNBC reviewed memoranda of agreement with Georgia, Arizona, Kentucky and Oklahoma, and the end result of the deals is “that states bear the burden of maintaining technology systems at taxpayer expense, a move that ultimately benefits Apple and its shareholders by making its devices even more essential than they already are.” Because only about half of all U.S. smartphones are sold by Apple, these deals mean that half of a state’s taxpayers get no benefit from the expenditure.

Apple apparently has acquired 240,000 square feet of commercial space in Boulder, Colorado, according to a report in the Denver Post. Citing marketing materials, property developer Crescent Real Estate is trying to sell more than 1 million square feet of a business park, Flatiron Park, and the materials refer to an “undisclosed tech tenant” that the Post thinks is Apple. Given Apple’s penchant for secrecy, no one who actually knows anything is talking.

Apple has offered to pay a settlement of $30 million to Apple Store employees who said that they were subjected to searches of their bags before they left work and were not paid for the time they spent standing in line waiting for the searches.

U.K.-based van leasing service Vanarama has put together an interactive look at an Apple Car design based on patent applications actually filed by Apple. Looks like the baby brother of Tesla’s Cybertruck, no? 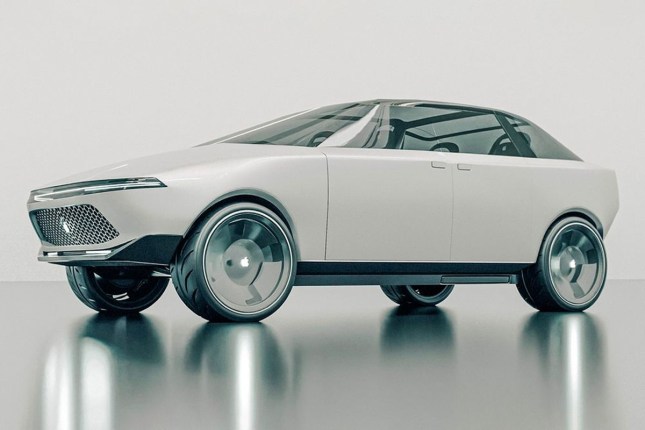