Google Inc. (NASDAQ: GOOG) may have a new application for Gmail that is another one of those things that won’t make the company that much more money.  Still, it is going to be just one more thorn in the side of major telecom players.  Welcome to Gmail’s CALL feature that the company is rolling out in the coming days.

The official Google blog explains this in detail.  Frankly it is a lot like the free version of Skype, soon to be its own public company now that eBay Inc. (NASDAQ: EBAY) sold off a majority stake.  This won’t be a true category killer to AT&T Inc. (NYSE: T) nor to Verizon Communications Inc. (NYSE: VZ).  It will, however, be just one more thorn in the side of the owners of the cell towers and the owners of all that copper wire around the U.S.

Google notes, “Calls to the U.S. and Canada will be free for at least the rest of the year and calls to other countries will be billed at our very low rates. We worked hard to make these rates really cheap (see comparison table) with calls to the U.K., France, Germany, China, Japan—and many more countries—for as little as $0.02 per minute.” 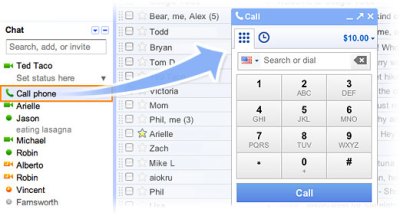 Skype is definitely a focus here.  But so are two companies that offer internet telephony for very low prices: Vonage Holdings Corporation (NYSE: VG) is the first; VocalTec Communications, Inc. (NASDAQ: CALL) now that it acquired the owner of the majicJack, the other very inexpensive phone service alternative.

Google has found yet one more industry it can disrupt.  Maybe it will consider making electric cars or staffing dry-cleaners next.