Frontier Communications Corp. (NASDAQ: FTR) shares got a big boost on Wednesday on the news that the struggling telecom operator signed a definitive agreement to sell its operations and associated assets in its Washington, Oregon, Idaho and Montana markets for $1.352 billion. This sounds huge for a company, with its mere $200 million market cap. Unfortunately, Wednesday’s 7% gain for shareholders wasn’t really very impressive when you consider that the stock opened up about 25% on the news.

The closing of the sale to WaveDivision Capital, in partnership with Searchlight Capital Partners, is subject to regulatory approvals and other closing conditions. The deal also may take up to a year to close. Frontier is classified as an incumbent local exchange carrier and is counted as the fourth largest wireline telecom operator in the United States.

Getting a massive cash infusion sounds great. Yet, what happens after you back out the operations from the dialed-down future Frontier? The operations sold generated $619 million of revenue; $272 million of its earnings before interest, tax, depreciation and amortization; and $46 million of net income for the 12-month period ending March 31, 2019. Frontier generated $8.5 billion of revenue in that trailing 12-month period. Its total revenue was $8.61 billion for fiscal year 2018 (ending December 31), and its 2018 net income from operations was a loss of $643 million.

Is it possible that taking close to a 7% drop to revenues actually will widen out Frontier’s losses? Frontier also is saddled with almost $16.7 billion in long-term debt, and its total liabilities at the end of March was listed as $21.8 billion, with a net tangible asset level of −$6.2 billion, after backing out $6.38 billion in goodwill and $1.36 billion in intangible assets.

At the end of the day, this sale sounds like a great cash infusion but it may only help temporarily prop up a weak company.

Moody’s Investors Service issued a report that the sale does not immediately affect Frontier’s B3 corporate family rating or the stable outlook. According to Moody’s:

The sale price represents a company-adjusted EBITDA valuation multiple of about 5x for the sold operations, which is about the same level as Frontier’s debt/EBITDA (Moody’s adjusted) of 5.2x as of March 31, 2019. While the use of proceeds is currently uncertain, the all cash sale proceeds will enhance liquidity and are expected to be used for debt reduction given the company’s recent financial policy actions. Given Frontier’s difficult path to deleveraging with organic growth by this transaction’s close in 2020, any debt reduction with sale proceeds would likely be credit neutral. However, if Frontier were to utilize these proceeds for anything other than debt reduction, rating pressure could ensue.

Fitch Ratings has a slightly better view. It noted that the cash raised to pay down debt will not affect the B Long-Term Issuer Default Rating despite boosting its near-term liquidity. Fitch also pointed out that Frontier did not disclose whether there would be taxes on the sale, but the company would be expected to use its net operating loss carryforwards if so. Fitch also noted that investors should consider the 1.5-times net leverage maintenance covenant in its secured credit facilities stepping down to 1.35 times in mid-2020.

CFRA’s Keith Snyder maintained his Sell rating on Frontier despite the $1.35 billion cash infusion. The CFRA view is that operations in these states serve more than 350,000 residential and commercial customers. The report said:

While we see debt reduction as a positive, we note Frontier will still have roughly $15.5 billion in long-term debt after the sale. We see these asset sales as an act of desperation, which will help FTR in the short run, but will harm it long-term as it cuts its revenue base, further limiting its ability to reduce outstanding debt.

Frontier may not appreciate this view, but in many ways these wireline carriers are dealing with customer losses like the decline in the tobacco industry’s number of smokers over time. What’s worse about the wireline segment in telecom than selling cigarettes is that cigarette companies have at least been able to raise their prices. In a wireless telecom world, how much pricing power do wireline operators have? On top of having large corporate and enterprise accounts that may opt to keep their wireline services, Frontier does at least have internet, video/TV and wholesale customers.

To prove the point further: Frontier’s $1.90 share price today is down over 95% from just about five years ago. It probably sounds like great news when a company is selling assets for more than six times its market cap. In this instance, it may only be a small blip. 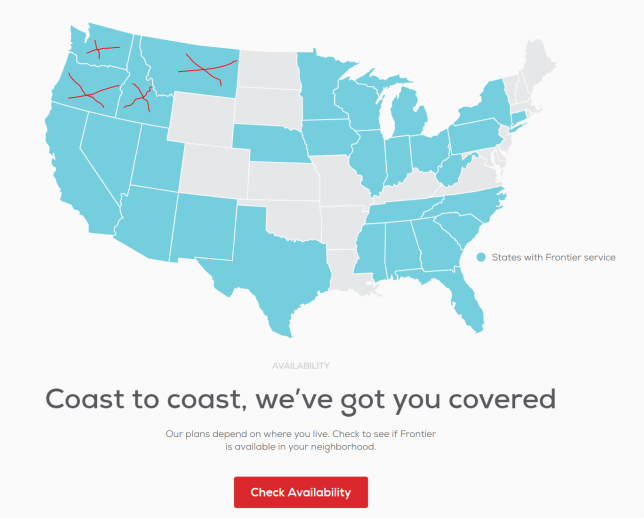