Coming next month AirlineFinancials.com estimates US Airways (LCC) will report an all time record 3rd quarter profit of $225 million from $3.2 billion in projected operating revenue.

Less than two years ago, US Airways reported a 3rd quarter loss of $242 million (including special items, the loss was $865 million). Toward the end of 2008, United (UAUA) and US Airways were at the top of many analysts’ list of carriers that were most likely to join the growing graveyard of failed airlines.

Just over 10 months ago in a conference call, US Airways CEO Doug Parker stated:

I think those of us [airlines] who are around have made it through a very difficult time. – It is not over – is probably the best way to say it. …This is still… what has to happen; we have to get this industry back to profitability.

The standard can’t just be survival. We passed that standard but there is a higher standard out there which is getting actual returns for investors on their investment.

Not only have Mr. Parker and the US Airways employees turned their airline around but they are now leading the industry in several categories.

In the last year, US Airways stock is up well over 200%. Excluding United, which had a higher stock return due to their merger with Continental (CAL), US Airways stock increase was over twice the return achieved by the other seven major airlines over the same time period (see following chart – time period is prior 52 weeks as of September 1st, 2010). 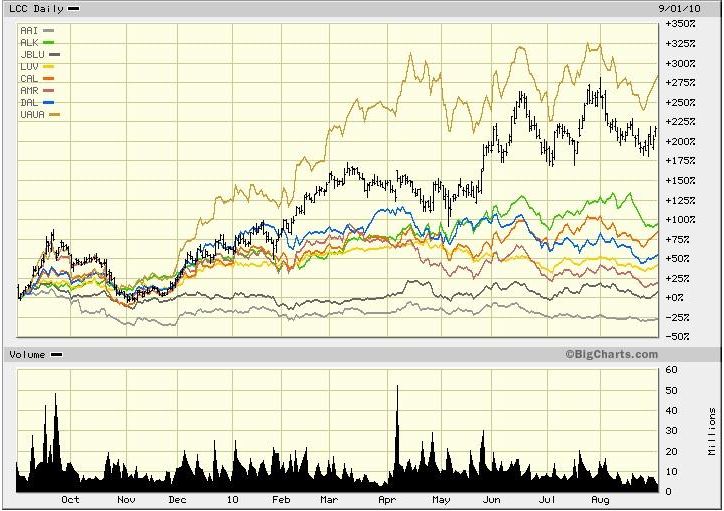 AirlineFinancials.com believes there are two primary reasons why US Airways is outperforming most of the industry on the cost side.

Recognizing that fuel and labor represent the two highest cost items for airlines, US Airways has a significant cost advantage over competitors.

On the revenue side for the recent 2nd quarter 2010, US Airways had:

Conclusion- Based on US Airways more recent strong performance both operationally and financially, there should be no doubt US Airways is ready to compete.

Disclosure- The above opinions and comments should not be used to determine the worth of any stock or investment. At the time of writing, the author and his family did not hold stock and/or derivative positions in any of the airlines covered in this article.

Robert Herbst is an independent airline industry consultant. He is the founder of AirlineFinancials.com which provides airline industry analysis and commentary for major US carriers. In addition to his consulting work, Mr. Herbst was a commercial pilot from 1969 until January 2010. His aviation experience and financial background provide a unique analytical perspective into the airline industry.