AirlineFinancials.com estimates the nine largest US passenger airlines will end the 2nd quarter with over $1.4 billion in profits. This could increase to $1.8 billion if fuel prices remain at or below current levels.

After two years of accumulating over $8 billion in losses, the airline industry is on track to finally show measurable profits. Of course this is the airline industry and history shows there are a number of events that could quickly turn projected profits into more losses. To see profit in the 2nd quarter, most airlines have to go back to year 2007.

It has been a long time since all of the airlines had year-over-year (y/y) revenue growth. In the recent 1st quarter, United led the industry with 14.9% top line revenue growth and Delta had the least at 2.5% (see chart below). 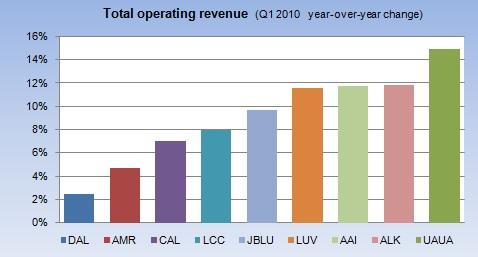 Revenue collected for future travel is categorized as a liability. When tracked over time, this metric is a good indicator of future traffic demand.

The following chart shows the y/y change in each airline’s advance bookings. Again, every airline had a y/y increase with United leading the industry while American has the lowest ratio. 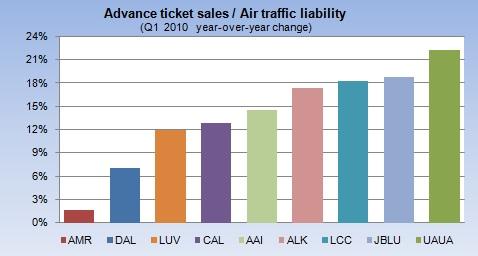 As most airlines reduced or stabilized capacity over the past few years, increasing traffic demand has allowed long needed price increases. The chart below shows the most recent y/y increase in unit revenue. Again, every airline was able to push unit revenues higher with United and Southwest having the largest increases. 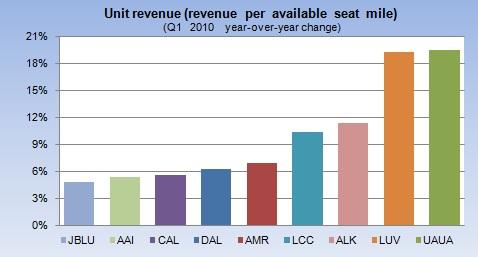 On the other side of revenue is “cost.” Fuel and labor each make up approximately one third of the total operating costs. The chart below shows the average unit operating cost (cost per available seat mile) with a breakdown for fuel, labor and all other. For the 1st quarter 2010, JetBlue had the lowest unit costs while American had the highest. 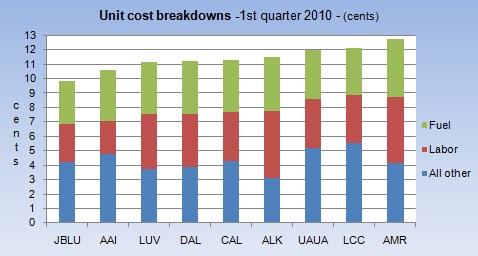 To gage how unit revenue corelates with unit costs over a specified time period, AirlineFinancials.com compares the y/y changes as a ratio and then calculates the ratio of that change. The following chart shows how each airline changed the gap between unit revenue and unit costs for the 1st quarter 2010 compared to the same quarter in 2009. United had the best increase toward profit while AirTran and JetBlue significantly decreased their spread between unit revenues and unit costs. 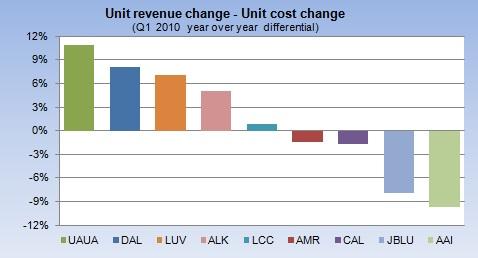 The most recent guidance from each of the airlines covered in this analysis projects 2nd quarter fuel costs based on (aproximately) ~$85 per barrel oil.

All of the airlines noted above use various fuel hedging methods. Depending on the price of fuel, these carriers have hedged from 30-70% of their fuel for the current 2nd quarter.

If the recent and significant drop in crude oil price continues through the last half of the 2nd quarter, all of the airlines will see a reduction in their projected fuel expense albeit offset by their fuel hedges.

If the crude oil price remains at or below the current $71/barrel, AirlineFinancials.com estimates that collectively these nine airlines will save approximately $340 million over what has been projected as the cummulative fuel expense for the current 2nd quarter.

Based on the analysis of each airlines’ hedging programs and fuel price projections, American will have the largest savings from any drop in fuel price (see following chart). 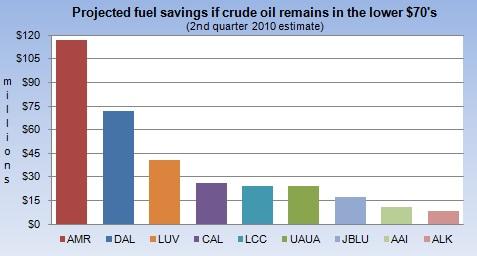 Looking forward and barring any unexpected events, it looks like the US airline industry may finally be able to claim profits for the current quarter and year 2010.

Disclosure- The above opinions and comments should not be used to determine the worth of any stock or investment. At the time of writing, the author and his family did not hold stock and/or derivative positions in any of the airlines covered in this article.

Robert Herbst has been a commercial pilot since 1969. His aviation experience and financial background provides a unique analytical perspective into the airline industry. He is the founder of: Airlinefinancials.com which provides airline industry analysis and commentary for major US carriers.