No Surprises in J.B. Hunt Earnings 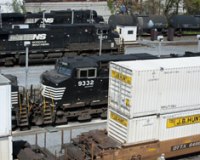 J.B. Hunt Transport Services Inc. (NASDAQ: JBHT) reported fiscal third-quarter results after markets closed today. For the quarter, the trucking and transport company posted diluted earnings per share (EPS) of $0.65 on revenues of $1.3 billion. In the same period a year ago, the company reported EPS of $0.57 on sales of $1.17 billion. Third-quarter results compare to the Thomson Reuters consensus estimates for EPS of $0.66 EPS and $1.28 billion in sales.

Revenue in the company’s Intermodal segment rose 15% to $794 million, “primarily from the continued customer conversion of highway traffic to intermodal.” Revenue per load was essentially flat compared with the same period a year ago. Operating income rose 25% year-over-year in the segment.

The company did not offer any further guidance in its published release. The consensus estimate for the fourth quarter calls for EPS of $0.70 on revenue of $1.32 billion. For the 2012 fiscal year, EPS is reckoned at $2.60 on revenue of $5.02 billion.

J.B. Hunt, like FedEx Corp. (NYSE: FDX) and other carriers, face rising operating costs and tighter margins. The company managed that pretty well. Hunt’s gross operating margin in the third quarter was 10.3%, up slightly from 10.1% in the same period a year ago.