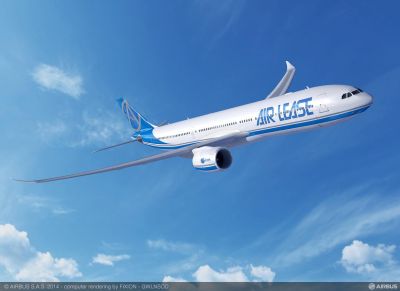 Source: Airbus Group NV
UPDATE: Airbus announced another order for its A320neo jets Monday morning. AerCap Holdings N.V. (NYSE: AER) will take another 50 of the narrow-body jets bringing the total order from the airline to 200 for Airbus’s new, more fuel-efficient version of the A320.

In another development Airbus revealed that the A330neo planes that it introduced earlier this morning at the Farnborough International Airshow carries a list price of $275 million. That values the Air Lease Corp. order announced earlier in the morning worth about $14.1 billion

Boeing, meanwhile, has announced that China’s Okay Airways has ordered six 737 MAX 8s and four of the company’s current generation 737-800s in a deal worth $980 million at list prices. The company also said it is nearing completion of a deal with U.K.-based Monarch Airlines 30 737 MAX 8s, which would begin the transformation of Monarch’s entire fleet to Boeing’s single-aisle planes.

Airbus Group kicked off the Farnborough International Airshow Monday morning with an announcement that the aircraft maker will indeed build an A330neo. Actually, the company has introduced two versions of the medium-range, wide-body plane: the A330-800neo and the A330-900neo.

Airbus introduced its new A330neos with an order for 25 A330-900neos from Air Lease Corp. (NYSE: AL). The company also ordered 60 of Airbus’s A321neos, a single-aisle narrow-body plane that competes with Boeing’s 737. The A330neo goes head-to-head with the Boeing 787 Dreamliner.

In its introduction of the A330neo, Airbus’s sales chief bragged, “[Boeing] are in a state of panic right now and they should be.” Airbus believes that it can sell 1,000 of the A330neos while Boeing thinks the company’s potential market for the plane is half that size. Airbus claims the capital costs of the A330neo will be 25% below those of the current A330 jets. The smaller A330-800neo (246 seats) will have a longer maximum range than the equivalent Dreamliner, while the A330-900neo will not match the Dreamliner’s range but will be cheaper to operate.

Boeing’s larger capacity 737 MAX 8 has been the subject of serious discussions between the company and Ryanair for years. Stuffing another 11 seats into the plane’s cabin puts the 737 MAX 8 a step ahead of the 189 seats on the Airbus A320neo. Ryanair is the largest low-cost carrier in Europe, and having capacity for 199 passengers maximizes the economics of the 737 and A320 planes. Adding a 200th passenger means adding another flight attendant.

We will have more from Farnborough throughout the day. The fun is just beginning.