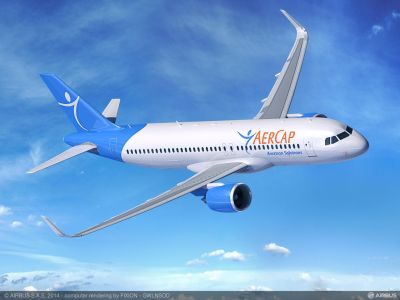 Source: Airbus Group NV
The Farnborough International Airshow opened this morning and we finally received official word from Airbus Group that the aircraft maker will indeed build an A330neo. The company has introduced two versions of the medium-range, wide-body plane: the A330-900neo and the A330-800neo. The larger A330-900neo will carry a list price of about $275 million and the smaller A330-800neo will cost about $242 million at list price, according to the company.

Airbus introduced its new A330neos with an order for 25 A330-900neos from Air Lease Corp. (NYSE: AL). The company also ordered 60 of Airbus’s A321neos, a single-aisle narrow-body plane that competes with Boeing’s 737 MAX 8. The A330neo goes head-to-head with the Boeing 787 Dreamliner. The Air Lease Corp. order announced earlier in the morning is worth about $14.1 billion at list prices.

Airbus also announced an order for its A320neo from AerCap Holdings N.V. (NYSE: AER), which will take 50 of the narrow-body jets, bringing the total order from the airline to 200 for Airbus’s new, more fuel-efficient version of the A320. The A320neo carries a list price of $102.8 million.

Boeing Co. (NYSE: BA), meanwhile, has announced that China’s Okay Airways has ordered six 737 MAX 8s and four of the company’s current generation 737-800s in a deal worth $980 million at list prices. The company also said it is nearing completion of a deal with U.K.-based Monarch Airlines 30 737 MAX 8s, which would begin the transformation of Monarch’s entire fleet to Boeing’s single-aisle planes.

Boeing has also announced a 200-seat version of its new 737 MAX 8, virtually guaranteeing a large order from Ryanair Holdings PLC (NASDAQ: RYAAY), which has urged Boeing to add a larger capacity version of the 737 MAX.

Boeing will stuff another 11 seats into the plane’s cabin, putting the 737 MAX 8 a step ahead of the 189 seats on the Airbus A320neo. Ryanair is the largest low-cost carrier in Europe, and having capacity for 199 passengers maximizes the economics of the 737 and A320 planes. Adding a 200th passenger means adding another flight attendant.