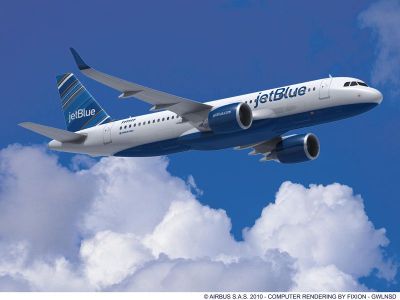 Source: courtesy of Airbus Group NV
Over the past 10 years, shares of JetBlue Airways Corp. (NASDAQ: JBLU) have lost nearly 16% of their value, while another low-cost air carrier, Southwest Airlines Co. (NYSE: LUV) has posted a share price gain of about 140%. Wednesday morning, JetBlue announced some changes that it says will add more than $400 million to its annual operating income beginning in 2017. At the same time, the airline will postpone its planned purchase of 18 Airbus jets from a prior delivery range of 2016 to 2018 to a new delivery range of 2022 to 2023, delaying capital spending of more than $900 million through 2017.

The airline plans to charge more for checked bags on all but its cheapest tickets. The company will introduce a three-tiered system of branded fares that will offer passengers a choice of no checked bag, one checked bag or two checked bags. The airline did not say what the pricing would be on the tiered fares, only that the new scheme would begin in mid-2015 and that pricing would vary based on demand.

The carrier also plans to make passengers more uncomfortable by adding 15 seats to each of its current Airbus A320 jets, increasing capacity to 165 seats per plane and cutting the average legroom from 34 inches to 33, according to a report from the AP. The retrofit is scheduled to begin in mid-2016 and will include larger seatback screens.

JetBlue expects the bag fees and tiered fare system to add $200 million in operating income and the seat increase to add an additional $100 million. The airline will continue to sell seats with additional legroom for a premium.

Since super-low priced Spirit Airlines Inc. (NASDAQ: SAVE) came public in May of 2011, JetBlue’s shares have more than doubled from around $6 a share. But Spirit’s share price has more than tripled and Southwest’s has soared by more than 550%. The merger between US Airways and American removed one competitor from the low-cost field, but JetBlue continues to get squeezed between Southwest and Spirit. The changes announced Wednesday will help in time, but it appears that JetBlue is taking aim at Southwest, not Spirit, and that may limit the success of JetBlue’s moves.