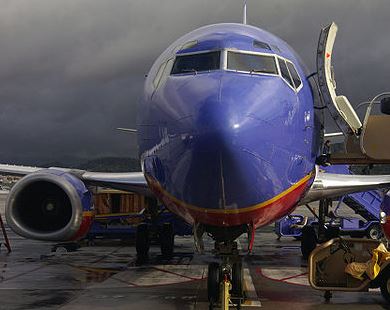 Source: Wikimedia Commons (Stuart Seeger)
If one theme dominates current Wall Street headlines, it is the strong dollar and currency headwinds. For the major airlines with big international routes into the United States, that could prove to be a factor this earnings season. A new report from Deutsche Bank favors the airlines with predominantly domestic routes.

While the huge drop in jet fuel pricing has been a boon for all the airlines, the domestic carries appear far better positioned to report solid earnings for the first quarter. The Deutsche Bank analysts are very bullish on four that are not only domestic leaders, but low-cost leaders as well. They are Allegiant Travel Co. (NASDAQ: ALGT), JetBlue Airways Corp. (NASDAQ: JBLU), Southwest Airlines Inc. (NYSE: LUV) and Spirit Airlines (NASDAQ: SAVE).

Allegiant Travel is focused on linking travelers in small cities to world-class leisure destinations. The company operates a low-cost, high-efficiency, all-jet passenger airline through its subsidiary, Allegiant Air, while also offering other travel-related products such as hotel rooms, rental cars and attraction tickets.

The company recently reported outstanding passenger numbers for March and the first quarter versus 2014. They also noted that first-quarter costs came in better than expected. Scott Sheldon, chief financial officer and senior vice president of Allegiant, said in a press release that:

Due to the low cost fuel environment and improved availability of pilots, we were able to add more growth in the quarter than we originally expected. In addition, we saw some maintenance events move to later in the year versus what we had planned.

The Deutsche Bank analysts point out that fuel price volatility is always a risk, as is an economic downturn, but they raised the estimates for the quarter and are very bullish on the stock overall.

Southwest Airlines is the top large-cap pick at Deutsche Bank, and it continues to increase the footprint and brand awareness all over the country. With the domestic market showing good strength, and the pricing environment looking very solid for 2015, revenues should stay strong and continue to grow. Tumbling jet fuel prices, which are almost 30% of Southwest’s total costs, have been a key for improving revenues and earnings. With almost no international business at this time, currency headwinds are not an issue for the airline, which Deutsche Bank views as the preferred U.S. play for pricing stability.

Southwest recently announced that newly designed seats, which will be seen on new 737-800s beginning mid-2016, join other significant brand milestones, including cabin interior updates on Southwest’s 737-700s, which will begin later this year, and continued 737-800 deliveries in the new Heart livery. The industry-leading seats are wider than current seats, and include an adjustable headrest and increased leg room, as well as more personal stowage, while decreasing the overall weight of the product. That is something all travelers can appreciate.

Southwest shareholders are paid a 0.6% dividend. The Deutsche Bank price target is a massive $60, and the consensus target is much lower at $55.06. The stock closed most recently at $42.50. Trading to the Deutsche Bank target would be a huge 41% gain.

Spirit Airlines is an ultra-low-cost carrier that has been on fire as fuel costs have plummeted. The company was recently named by Air Transport World as the Value Airline of the Year at the 41st Annual Industry Achievement Awards ceremony. The carrier’s super-low prices, which are way below industry standard, allow customers to pay up to choose additional amenities.

Spirit has seen a 40% growth in customer satisfaction, according to internal surveys. This growth has also led to Spirit being included in the Department of Transportation monthly Air Travel Consumer Report beginning this year. While the absolutely no-frills airline is not for everyone, it has a loyal customer following, which continues to grow.

ALSO READ: Why This Analyst Is So Positive on Delta Air

The Deutsche Bank report states the simple fact that domestic airlines could be poised to have much better results than the international carriers. While some of them could also be solid, these low-cost domestic carriers could blow away numbers.