The U.S. Army on Friday ended a nearly 10-year long competition to supply the service with a new handgun. The Army awarded a contract valued at $580 million to Sig Sauer, a subsidiary of Germany’s Luke & Ortmeier Gruppe with a subsidiary based in New Hampshire. American Outdoor Brands Corp. (NYSE: AOBC), the holding company that owns Smith & Wesson, was among the four also-rans, along with FN America, Beretta and Glock.

The Army is replacing the Beretta M9 handgun that has been in service for the past 30 years with a modular handgun system (MHS) that includes interchangeable grip modules and can be adjusted for frame size and caliber by the operator.

The Beretta M9 replaced the .45 caliber Colt 1911 model in 1985 and also replaced the .45 caliber round with a NATO-standard 9mm round. The Sig Sauer P320 MHS can use 9mm, .357SIG and .40S&W rounds. The Army has not indicated which round it selected, although Sig Sauer is reported to have submitted both the 9mm and .40 caliber round for consideration.

Smith & Wesson, along with FN America, were eliminated from the competition in December and the contract battle was down to Sig Sauer and Glock, which had entered its Glock 17 and Glock 19 models for consideration. According to a report at Military.com, Glock is expected to protest the decision.

Unconfirmed reports indicate that the Army plans to acquire 280,000 of the weapons, with a possible increase to as many as 500,000. The Army is also believed to be purchasing about 7,000 of the compact version of the weapon designed to fit smaller hand sizes. 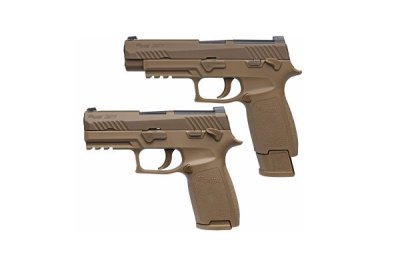 One of the major goals of competition was to choose a pistol chambered for a more potent round than the current 9mm. Army acquisition executive Steffanie Easter said in a press release:

By maximizing full and open competition across our industry partners, we have optimized private sector advancements in handguns, ammunition and magazines, and the end result will ensure a decidedly superior weapon system for our warfighters.

Deliveries of the new handguns are expected to begin in 2018.