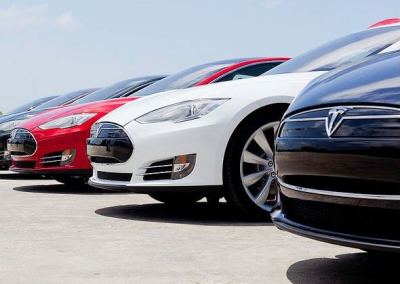 Source: courtesy of Tesla Motors
Tesla Motors Inc. (NASDAQ: TSLA) reported fourth-quarter and full-year 2014 earnings after markets closed on Wednesday. For the quarter, the electric car maker posted an adjusted diluted earnings per share (EPS) loss of $0.13 on adjusted revenues of $1.1 billion. In the same period a year ago, the company reported adjusted EPS of $0.02 on revenues of $761.34 million. Fourth-quarter results also compare to the consensus estimates for EPS of $0.31 and $1.23 billion in revenues.

On a GAAP basis, the carmaker lost $0.86 per share, compared with a year-ago quarterly loss of $0.13 per share. GAAP revenue totaled $956.66 million. Adjusted revenue includes $138.97 million in deferred Model S gross profit due to lease accounting.

The carmaker built 11,627 vehicles in the quarter, reaching its production target of 35,000 for the full year. But Tesla was unable to deliver all those cars, delivering 9,834 in the quarter. The company said it was unable to deliver about 1,400 units in December for a variety of reasons, including severe winter weather and shipping problems. The vehicles were delivered in the first quarter.

The company directly leased 647 cars in the fourth quarter and said it expects to lease “about the same percentage of cars” in the first quarter of 2015.

Operating expenses are expected to rise 45% to 50% in 2015 as the company spends to increase engineering and design efforts. Capital spending is penciled in at $1.5 billion to add production capacity, complete development of the Model X, invest in the Gigafactory, increase the number of Supercharger stations by more than 50%, and invest in stores and service centers.