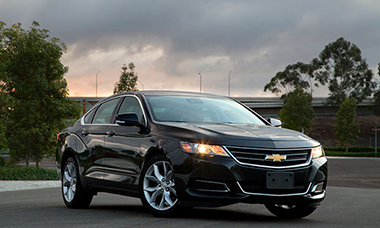 Source: General Motors Co.
There could be as many “best” family cars as there are families, but then what would we have to talk about and argue over? The analysts and editors at Kelley Blue Book (KBB) recruited U.S. families to evaluate a range of vehicles and, based on the results, KBB put together a pool of 23 vehicles ranging from full-size pickup trucks to compact sedans from which the 15 top family cars for 2015 were selected.

2015 Chevrolet Impala
The only full-size sedan on the list, the Impala from General Motors Co. (NYSE: GM) had already been named KBB’s best buy in the 2015 full-size category. The manufacturer’s suggested retail price (MSRP) for a base model of the Impala is $27,735. GM completely revamped the Impala in 2014.

2015 Ford F-150
The F-150 Series pickup truck from Ford Motor Co. (NYSE: F) is one of two full-size pickups to make this list of best family cars. A lot of pixels have been burned already describing the all-new F-150 with its aluminum body and improved mileage rating. The standard cab pickup carries an MSRP of $27,810.

2015 Honda Accord
The Accord is Honda Motor Corp.’s (NYSE: HMC) midsize sedan, and the car has already been named KBB’s best buy in that category for 2015. The car’s 31 miles per gallon combined fuel efficiency rating for the four-cylinder version with a continuously variable transmission is also noted by the editors at KBB. The MSRP for a four-door sedan with standard equipment is $22,925.

2015 Honda Civic
The compact Civic is remarkably successful at achieving a goal of being all things to all people, according to the editors at KBB. The car’s highway fuel economy rating is 41 miles per gallon, and the Civic is the second-lowest priced car on this list with an MSRP of $19,310 for a four-door sedan.

2015 Honda CR-V
The small SUV category is crowded with entrants, and the CR-V is one of two to make this list. The vehicle was redesigned in 2012 and refreshed last year. The MSRP for the base model is $24,325.

2015 Hyundai Sonata
The midsize Sonata was redesigned for the 2015 model year and the editors at KBB say that the car gave the Honda Accord all it could handle in the battle for 2015’s best buy in the midsize category. The car’s MSRP is $21,975.

2015 Kia Soul
The Soul is categorized as a compact car and joins the Honda Civic as the only two cars from that category on this list. The editors of KBB cite especially the hatchback version’s versatility. The MSRP on the car is $16,015, the lowest of all the cars on this list.

2015 Nissan Pathfinder
Nissan didn’t just redesign the Pathfinder in 2014 but reimagined how a midsize SUV can work. The Pathfinder is on the large end of the midsize scale, with its three-row seating, but it does offer a lot of space for cargo and passengers. The vehicle’s base MSRP is $30,395.

2015 Subaru Outback
The other small SUV on KBB’s list, the Outback continues to offer standard all-wheel drive in a fully redesigned version for 2015. The MSRP for the base version is $25,745.

2015 Toyota Camry
Toyota Motor Corp. (NYSE: TM) improved on its best-selling midsize car in the United States with both an interior refresh and some added exterior touches for 2015. Like the Honda Accord, the Camry’s reliability helps the car maintain its high resale value. The MSRP for the four-door sedan is $23,795.

2015 Toyota Highlander
Toyota’s midsize SUV also maintains the company’s reputation for highly reliable, high resale-value vehicles. Like the Pathfinder, the Highlander features three rows of seating and, as an option for when the kids have gone off, a second row of captain’s chairs to replace the bench seat. The base model carries an MSRP of $30,550.

2015 Toyota Sienna
The other minivan on the list, Toyota’s Sienna got an interior design refresh this year and remains the only minivan on the market with available all-wheel drive. The MSRP on the vehicle is $29,485.