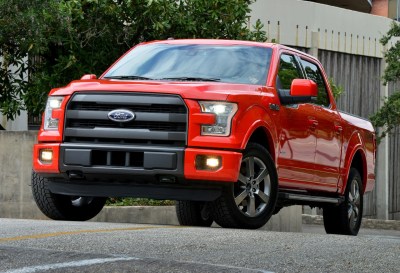 Source: Ford Motor Co.
U.S. sales of pickup trucks by the Detroit Three automakers took a bit of a dive in June. The top-selling F-Series from Ford Motor Co. (NYSE: F) posted a sales decline of 8.9% year over year, and the Ram pickups from Fiat Chrysler Automobiles N.V. (NYSE: FCAU) could manage just a 1% year-over-year increase in sales.

General Motors Co. (NYSE: GM) reported a sales year-over-year gain of 18.4% on its Silverado pickups to a June total of 51,548 units. The GMC Sierra pickups posted a gain of 20.8% in June, and combined the two pickup models sold 70,166 units in June.

At Ford, June sales declined to 55,171 units and sales are now down 2.4% year to date. Truck sales comprise about 34% of all Ford division sales and the F-Series pickups accounted for 24% of total sales in June. Ford has said that F-150 sales will strengthen in the second half of this year, once the second assembly plant in Kansas City is running at full capacity. The company had better hope so.

With its two full-size pickup offerings, GM now has about 42% of the overall pickup market, and sales of the Chevy Silverado are now less than 10% below those of the long-time leader, the F-Series from Ford.